Home > Alaska's Inside Passage by Bike

Alaska's Inside Passage by Bike

Majestic glaciers, spectacular mountain ranges, and scenic coastlines routes, our Alaska Inside Passage bike, ferry, train and kayak adventure has it all. Cycle through small towns alive with cultural and culinary treats while exploring the remote and untouched wilderness of North America by bike.

Alaska’s Inside Passage offers an unforgettable cycle touring experience through one of America's most spectacular scenic treasures.

A breathtaking journey by rail, water and two wheels from Haines to Skagway, concluding with a kayak at Mendenhall Glacier outside Juneau. A cyclist and nature lovers' dream. Pedal past remote alpine lakes and through subarctic forests, enjoy the tranquility of floating through nature preserves, and explore the funky charm of gold rush era towns to sample local craft beers and ciders. On our final day kayak to the face of Mendenhall Glacier - where the icecap meets the sea.

Total Cycling 134mi / 215 km (longer route options are available on several days)
Biking the Inside Passage - Flat coastal roads give way to rolling terrain. Spectacular scenery abounds when cycling the coastal regions of southern Alaska. Our route follows mostly paved roads with some sections of loose gravel riding. The riding is suitable for anyone who is comfortable on a bike.

A limited number of E-bikes are available on a first-come basis - E-bike Surcharge: $390. 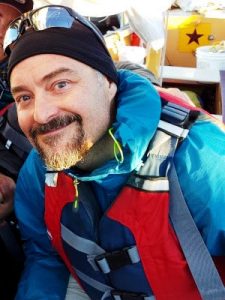 We are excited to have Steve join our tours in Alaska. An author, naturalist and environmental educator, Steve has wandered the world exploring unique ecosystems and habitats and is quick to point out that one of the planet’s most interesting and biodiverse is right in our backyard.

His passion for nature stems from his first stay in Alaska, which makes both the state and its natural surroundings close to his heart. On tour he will be your go-to expert for all things wild and wonderful, opening up a whole new dimension to what is already a spectacular setting.

The tour begins at 2pm in Haines. Your Grasshopper guides will be on hand to assist with a bike fitting, orientation and then lead our first ride to Chilkoot State Park.

Haines is unique geographically, as several coastal mountain ranges converge in this area, providing views of both open waters and beautiful peaks. We’ll pedal to Chilkat State Park, as trails here offer us close-up views of two nearby glaciers: Rainbow and Davidson. Commercial fishing started in Haines in the 1880s, and by the early 1900s several canneries lined the town’s waterfront, visible as we make our way back to town.

Tonight we'll enjoy a welcome group dinner and you can get to know your fellow travelers a little better.

This morning's ride takes us along the Chilkat River to the Tlingit village of Klukwan. The town's name, Klukwan, means "eternal village.” Unlike other Tlingit communities, Klukwan is governed exclusively by a traditional tribal council. This modest town has a small school, a health clinic open two days a week, a community garden, and a small grocery store.

In 2017 the tribe celebrated the opening of a new Cultural Heritage Center with the hopes of attracting tourists to support their community. Inside the center, you’ll find colorful totems and traditional weavings on display.

Following lunch we’re in for an unbelievable experience: floating through the world-famous Chilkat Bald Eagle Preserve, boasting the largest nesting area of bald eagles in the world. This is a calm journey (no whitewater), and we’ll be on the lookout not only for eagles, but also for bears, moose, even wolves, all drawn to the preserve by the spawning salmon.

Our day ends back in Haines with time for you to explore the small town’s big food reputation as you wish. Guides will offer their recommendations.

There's time this morning for a ride to Chilkoot Lake, approximately 14 miles from town. We'll end the route back in Haines and board a private ferry taking us along the Taiya Inlet to Skagway, gateway to the Klondike.

The name Skagway is a Tlingit idiom that refers to the rough seas of the inlet caused by strong north winds. Founded in 1897, a year after gold was first discovered near Dawson on the Yukon River, Skagway served as a base of operations for thousands of prospectors during the Klondike gold rush of 1897-98. For a while it was the largest city in Alaska.

Skagway today looks like a Hollywood movie set, only the history here was real. A ranger-led walking tour of the historic downtown will get us away from the tourist shops and offer an oral history of this remarkably resilient community.

A pleasant hour of cycling brings us to historic Dyea, once known as Skagway’s sister city. In 1897 Dyea boasted over
150 businesses, including the Olympic Hotel, a three-story structure billed as “the largest in Alaska.” Change came quickly though, with the building of the Whitehorse & Yukon Railway, and by 1903 the town was being abandoned.

We will bike back to town with time to explore the historic center of Skagway. Tonight your dining options are open again, guides can help with suggestions.

This morning you’re in for a real thrill, a ride aboard the historic White Pass & Yukon Railway. The train route was closed in 2021, so we're looking forward to being able to welcome you on board this year as we follow the route of the early gold prospectors to Fraser, British Columbia.

With a picnic lunch en-route, once we’re off the train we’ll hop on our bikes for a scenic downhill ride back to Skagway. Tonight we’ll have dinner in the private dining room of Skagway Brewing. We’ll meet the brewing team, sample their award-winning beers, and also tour their state-of-the-art indoor hydroponic gardens.

A morning Fjordland fast ferry heading south offers an opportunity for dramatic and up-close encounters with the marine life of the Inside Passage. We like to think of this as our whale watching excursion, gliding over the inland sea to the tip of the Glacier Highway, north of Juneau.

Our cycle route follows Alaska Route 7, through the Tongass National Forest. At sixteen million acres, it’s America's largest forest preserve. From Echo Cover we’ll skirt Point Bridger State Park on a route offering up views that will likely have you off the bike at regular intervals for photos.

Tonight we enjoy our final evening dinner together in lively Juneau. Surrounded by spectacular scenery and famous for its welcoming attitude, this is a capital city unlike any other in America.

No visit to Alaska should be complete without experiencing the grandeur of a glacier from the seat of a kayak. Our final day begins with a pedal to North Douglas Island. Nearby we meet our kayaking guides and paddle to the face of Mendenhall Glacier, a 13 mile-long river of ice.

This magnificent wilderness setting features snowcapped mountains, rushing waterfalls, pristine forests, and the tranquil waters of Mendenhall Lake. Paddle the glassy waters of the lake, gliding past glowing icebergs, drifting up close to the glacier while spotting an amazing range of wildlife, including nesting gulls and arctic terns, mountain goats, river otters, beavers, bald eagles, and possibly black bears. Few glacier tours in Alaska are as accessible and beautiful as this one!

Picnic lunch en-route and we'll be back in Juneau by early afternoon bringing our Alaska Adventure to a dramatic conclusion.

Good quality, well-maintained bikes suited for this itinerary are provided on tour, along with a helmet and water bottle.

Local Alaskan-based guides will lead the group on the tour, bike rides and hikes, they have a passion for the region and many years of guiding experience. In addition Grasshopper's own Expert Naturalist will also accompany the group as a host and nature guide.

A limited number of Trek Verve+ 2 electric-assist bikes are available as an optional extra. These are great for exploring the scenic beauty of Alaska's Inside Passage. the Bosch Active Line motor provides smooth, reliable assistance when you need it.

Please note: Due to the limited number of e-bikes available, these can only be allocated on a first-come basis as supply permits.

Hotels are typical of this region of Alaska, and along the route we've selected comfortable and stylish accommodations with ensuite facilities to ensure you a good night's rest.

A support van follows along our cycle routes with our luggage, water, snacks, supplies and lots of room for anyone who feels like taking a break from cycling.

Alaska is famous for fresh fish, seafood, and an abundance of locally sourced vegetables & seasonal fruits. Dietary restrictions can be accommodated on this tour.

In addition, on rides we provide snacks and water at regular intervals to ensure you are well fueled and hydrated at all times, allowing you to get the most from your active adventure.

On this tour we provide you with a Grasshopper Adventures cycling jersey and water bottle, both of which are yours to take home as an additional souvenir from the journey.

There is no surcharge for single travelers - we will match you with another same-sex single traveler if joining alone. If you wish to have a private single room instead, there is an optional upgrade you can select when booking. 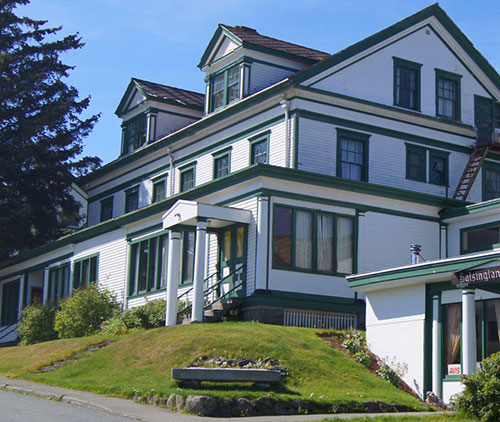 The Halsingland, designed in Jeffersonian style and adjacent to historic Fort Seward, offers an authentic turn of the century experience in the fun, outdoorsy town of Haines, Alaska. 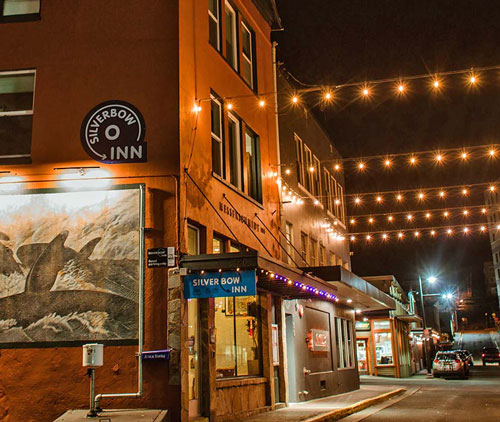 Originally built in 1898 as a bakery, the historic Messerschmidt Building now houses the Silverbow Inn. This boutique property situated in the heart of downtown Juneau, opens to a city with a fun, northwest vibe. Consider Juneau and the Silverbow Inn for an extra day or two of exploring the Alaskan state capital on your own.

"Memorable, marvelous, inspiring! Just a few or the superlatives that come to mind when describing our Grasshopper Inside Passage Alaska tour. Most people who visit Alaska sightsee by cruise ship. It was so much more fun to explore by bike, ferry, raft, kayak, and finally, tiny plane, in the company of a small group of seasoned travelers who share our adventurous spirit. Highly recommend, and we would do it again!"

"The Alaska Inside Passage tour was excellent. The guides were very well-organized and every detail was looked after. They were genuinely interested in us having a very good time. They were very friendly and very inspiring people to get to know. As well as being sincerely interested in the tour, they each had their own interests and job pursuits as well. I was a slower cyclist, so I got to talk to them quite a bit! They organized the tour so that we saw the best of the sights in the area, and the cycling days were scenic, interesting, and a good length. The meals were very tasty, too."

BOOK THIS TOUR
Any tour can be made private! Request quote GO PRIVATE
More Trips

WHAT MAKES US STAND OUT

Your tour is not just about ticking the highlights, its about having an unforgettable travel experience. On our active-escapes in North America, you'll enjoy a stimulating variety of activities, getting off the worn tourist routes and into nature, while also meeting local experts and learning along the way. Your experience will leave you feeling rejuvenated, refreshed, and genuinely connected to the people and place.

Why Us? The Grasshopper Adventures Experience

Cycle & Kayak the Coast of Maine