Explore the iconic backwaters of Bangkok by boat and bike. Enjoy Chao Phraya River by ferry ride, Portuguese bakery, temples, tree-lined canals, traditional artist workshops and an included lunch on this crafted adventure through Bangkok. This tour has fun activities for all the family.

Please Note: Thailand day tours will not operate April 13th to 15th over the annual Songkran (water festival) holidays. We will resume tours April 16th after our guides have enjoyed a well-deserved break. Sorry for any inconvenience and enjoy the celebrations!

Fun for the whole family!

Gather at the Grasshopper shop
Meet at the Grasshopper Adventures Bike Tours Shop near MRT Sam Yot station at 9:30 am. The tour will depart at 10 am sharp. Make sure you allow plenty of time to get here, taking into account the heavy Bangkok traffic. After a quick bike fitting and briefing, we hit the bikes. We will be cycling off the main road on small lanes, alleyways and canal boats to immerse you in the soul of Bangkok.

Ferry and cycle to the communities of Santa Cruz Wat Kalayanamit
Here along the banks of the Chao Phraya River is where Bangkok first began. We’ll park our bikes at the first Christian community of Santa Cruz to visit the descendants of the early Portuguese traders who have been making a Portuguese cupcake for over 5 generations. We then pedal to the neighboring Chinese Thai temple of Wat Kalayanamit and the site of Bangkok's first Chinatown. Wat Kalyanamit houses Bangkok's largest sitting Buddhist image.

Cycle to Wat Hongrattanaram
Here we will park our bikes briefly to see a shrine devoted to the first king of Bangkok, Taksin. The Chapel of Wat Hongrattanaram is the largest in Thonburi and, according to some, the most beautiful in Bangkok.

Cycle Khlong Bang Luang and the Artist’s Village
Cycling back lanes and pedaling along small tree-lined canals, we will arrive at an old wooden market with a historic community temple. Centuries ago, trading communities formed along the canals on the outskirts of Bangkok to buy the goods coming to market from the outlying farms and orchards. The former wealth of these trading communities can be seen in the elegant architecture of the temples they left behind.

A local Thai lunch by Bang Luang Canal
Enjoy a simple tasty Thai lunch in a local eatery by the canal in the grounds of the community temple. Thailand is known for its variety of spices and flavors and your meal will surely be a highlight of the day.

Traditional Thai Puppet Show
A group of Artists has taken up residence in a 200-year-old traditional wooden house on the banks of Khlong Bang Luang. Marvel at a show of the most unique puppetry you may ever see, as the art is combined with traditional Khon dance by the Hoon Lek puppeteers. The modern inhabitants of the old wooden trading houses these days sell artwork and vintage crafts as well as fish food for you to feed the abundant fish in the canal.

Ply the Canals and the Chao Phraya River
After stowing the bikes in the back of a long tail boat, you and your guide wend your way down the ancient canals to Chao Phraya River. Sailing up the River of the Kings, you will pass the Grand Palace before docking near Khaosan Rd.

Top quality Merida mountain bikes with lights, and a water bottle and helmet are provided.

We take to some really interesting and beautiful temples that few visitors ever get the chance to see. You will even get to see the largest Buddha image in Bangkok.

Travel by long boat along the Chao Phraya River then through a maze of canals. Take in Bangkok from the different perspective of a long tail boat.

A delicious Thai lunch is included in the tour. All dietary requirements catered for. Clean water and snacks are also provided throughout the day.

An experienced English speaking, local leader will host you on this trip who is well spoken, very knowledgeable, and charming. Our leaders are often cited as being the main highlight of the tour. We use local guides who have a passion for their country and are always well informed on topics ranging from history, politics, cuisine and importantly local customs and cultures. Our leaders will take pride in introducing you to every aspect of their country while making your safety and comfort top priorities.

This tour is guaranteed for a minimum of just 1 traveler. And we limit the group size to only 10 travelers so that you get all the attention you want in an intimate group. 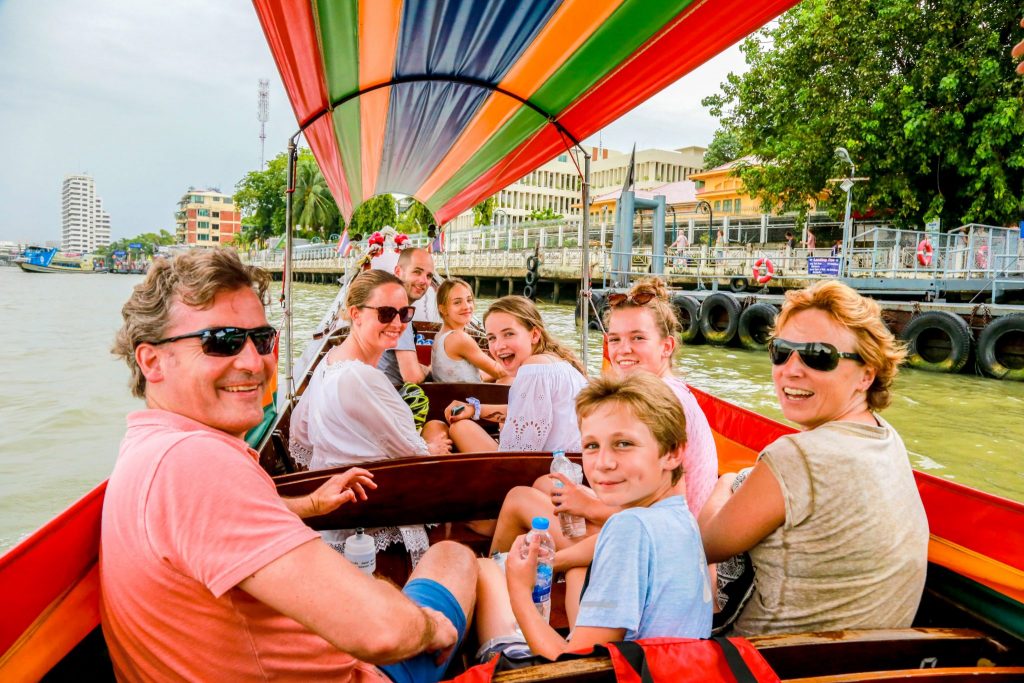 The most efficient way from downtown to our area is on the Klong Saen Saep Boat. Take the Skytrain to Ratchathewi Station, go out of exit 1, then walk toward Siam Square/MBK along right hand side of the road. As you go over a bridge you will see the canal (klong) beneath you. Go over the bridge and turn right down the steps and walk to the water. This boat stop is called Hua Chang. Take the boat heading to Phan Fa Lilat (just ask for Khao San road) which is the last stop. From there, again ask for Khao San Road. You can walk in 10 minutes or take a tuk tuk. We are 200 meters from the McDonalds at Democracy Monument. The boat service closes at 7pm so it cannot be used to get back to your hotel after the tour.
HYPERLINK "https://khlongsaensaep.com/" > Find out more about the Canal Boat Service 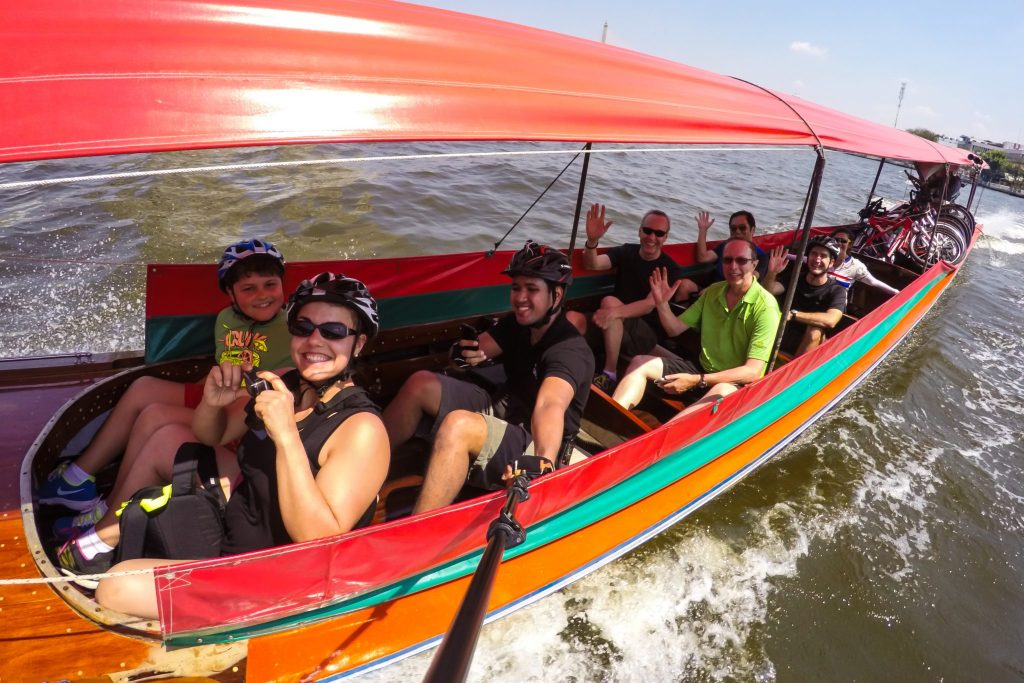 It is possible to get reasonably close to us on the Chao Phraya Express Boat getting off at Pier N13 Phra Athit which is a 15 minute walk or short tuk tuk ride from Phra Athit Pier. The ferry takes about 1 hour from Central Pier at Sapan Taksin. The boat service closes at 7pm so it cannot be used to get back to your hotel after the tour.

Street numbers are not overly useful in Thailand as people work more off landmarks and intersections. The best landmark close to us is Sam Yod MRT station. 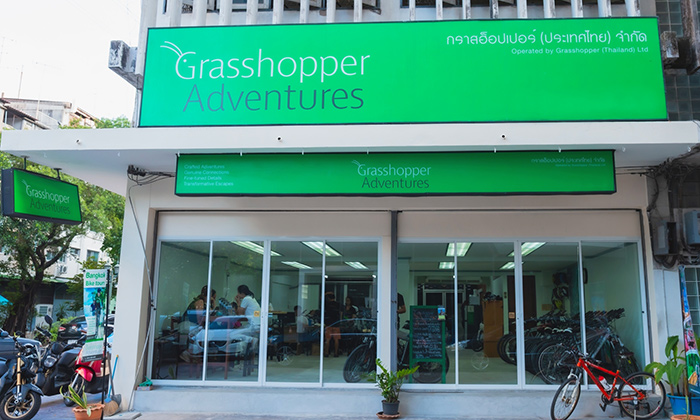 MRT
The shop is just a 4-minute walk from the new MRT station Sam Yod and just one block away from Miramar hotel. We are at the last building on the same block with KC Music Center.

Taxi
It is worth printing the map on this page to show a taxi driver if you choose to come to the Grasshopper Shop by taxi. Bear in mind that you will be traveling during peak hour so if travelling from the downtown area you should allow at least one hour to get here.

River Boat
It is possible to get reasonably close to us on the Chao Phraya Express Boat getting off at Pier Memorial Bridge which is a 15-minute walk or short tuk-tuk ride from Phra Athit Pier. The ferry takes about 1 hour from Central Pier at Sapan Taksin. The boat service closes at 7pm so it cannot be used to get back to your hotel after the tour.
Find out more about the River Boat Service

Even if you only have a short time in Bangkok, this trip is totally worth the time. You get to see Bangkok away from all the tourists and all the malls. Instead, you'll visit areas where real people live and work, winding your bike through narrow alleyways, through humble neighborhoods and along canals.

Got to see a slice of life that we wouldn't have otherwise. We stopped for interesting snacks and lunch - all of which were great, and rounded it off with a longtail boat ride.

A great way to see the back streets of Bangkok. Max our guide was brilliant, and made it fun and safe! Would recommend it!

Our family (with two teens and a tween) really enjoyed the canal tour. Tammy was a funny, personable, and knowledgeable guide.

At the end Bett asked me what the highlight was, and it was hard to choose between the bakery, temples, boat ride, and authentic Thai food over the canals. I'd highly recommend it you want to get a little exercise and see the real Bangkok!

The alleys and canal-ways we rode along were charming and shady - so unexpected in a city like Bangkok! … The bikes are good quality, well maintained, comfortable, and there are plenty to chose from (helmets, too). We joined three Grasshopper tours in Cambodia last Fall, all of them excellent.

1. Is this a good bike tour for families?

This is our best Bangkok tour for families. This is a really fun way to explore old Bangkok with lots of interesting things for the kids to discover. The routes are well researched to provide the safest way through the city and the guides are well trained in safe cycling.

2. Follow link below for general questions about our day bike tours

THIS TOUR CAN SELL OUT QUICK!

SAVE YOUR SPOT NOW! RELAX LATER!

Where Are You Going Next?

Catch some visual inspiration for an active adventure in Thailand by checking out our Youtube channel.

and Myanmar are temporarily suspended


We apologize for any inconvenience