The top 5 historical sites in Sri Lanka exist as a result of being steeped in a history of constant fluctuation. Positioned in the path of hundreds of ancient trade routes, Sri Lanka has seen a tremendous variety of traffic over its years. These include a mix of immigrants, invaders, traders, missionaries, and travelers. Visitors came from India, East Asia, the Middle East, and Europe, producing the rich history we find in Sri Lanka today. This small island holds no less than eight UNESCO World Heritage sites. These stand a testament to the visionary projects of early rulers.

Sri Lankans excelled at building remarkable architectural projects. Among them is the 5th century Sigiriya. In the central province of the island sits the rock fortress whose name translates to Lion Rock, also called “the Fortress in the Skies”. An especially unique capital structure in the world, some claim it remains the most daring construct of the first millennium.

According to historical records, King Kshyapa (477-596 AD) chose this site for his new capital. It combines a palace and garden complex built on a massive rock column almost 660ft (200m) high. He decorated the sides with frescoes. Eighteen survived to today. He placed a massive guardian lion statue arching the stone staircase. The stairs then lead to the palace, pools and gardens. Now, only the giant lion’s paws remain, positioned on both sides of the entrance. The lion’s head and legs collapsed long ago. The Mirror Wall, a unique construction further in, continues to fascinate travelers. One hundred meters of a polished wall, once gleamed white and stood reflecting the wall of frescoes opposite. Later, this surface became an irresistible tablet for visitors to the site. The earliest inscriptions and poems date back to the 8th century.

The site’s capital function lasted only a short time. Royalty abandoned it after the king’s death. Later a Buddhist monastery occupied the location until the 14th century. The ancient capital found its way into myths and legends. Ramayana (a Sanskrit text of ancient India) recognizes it as a location of the “The City of Gods”. Today, UNESCO lists Sigiriya as a World Heritage site. The 1500-year-old ruins stand proof of Sri Lankan engineering genius. It remains one of the best-preserved locations of ancient city planning.

2. Temple of the Tooth 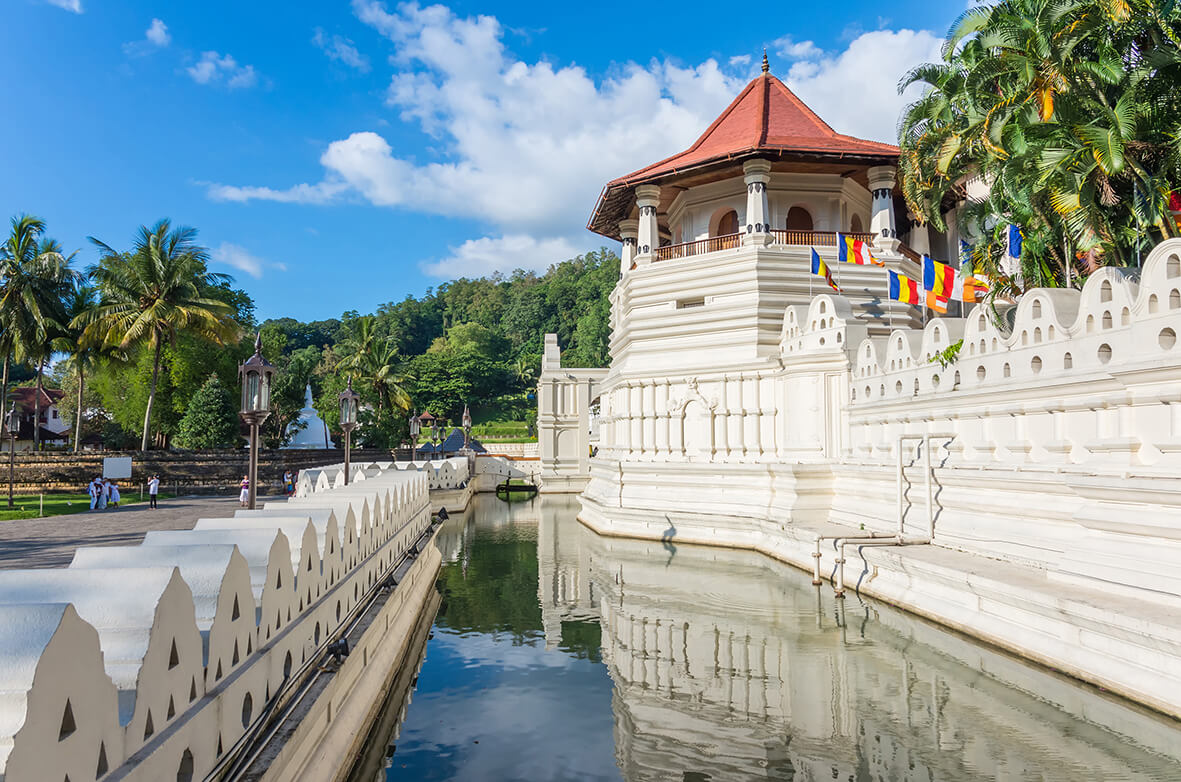 The city of Kandy sits southcentral on the island and houses Sri Lanka's most important Buddhist artifact — the tooth of the Buddha! An elaborate golden-roofed temple was built around the sacred tooth and overlooks the Kandy Lake. For many, this relic sits at the very top of 5 historical sites in Sri Lanka. They say that the one who bears Buddhas Tooth also holds the governing power of the country. Partly for this reason, it’s listed on UNESCO’s World Heritage list. As the most revered site in Sri Lanka, the significance of this temple in the Buddhist world cannot be understated. Weekly, the relic receives a symbolic ritual bathing with scented water and flowers. The people present then partake in the distribution of the resulting holy water and its believed healing powers.

Historical records (of which there is some variation) state that everything started after the passing of Gautama Buddha in India. People took the tooth from the funeral pyre to King Guhasiva who then preserved it. Later, under pursuit of Hindu forces, Princess Hemamali smuggled it to Sri Lanka in her hair. The King received the ancient relic as a gift at the capital in Anuradhapura in 313 AD. Those on the island worshipped and protected it up through today.

Some tips for a visit: Be sure to buy the tickets at the entrance, and not from anyone else. Please take off shoes and cover knees and shoulders when entering the temple. Photography is prohibited inside the temple and the ceremony times are 05:00 and 18:00. 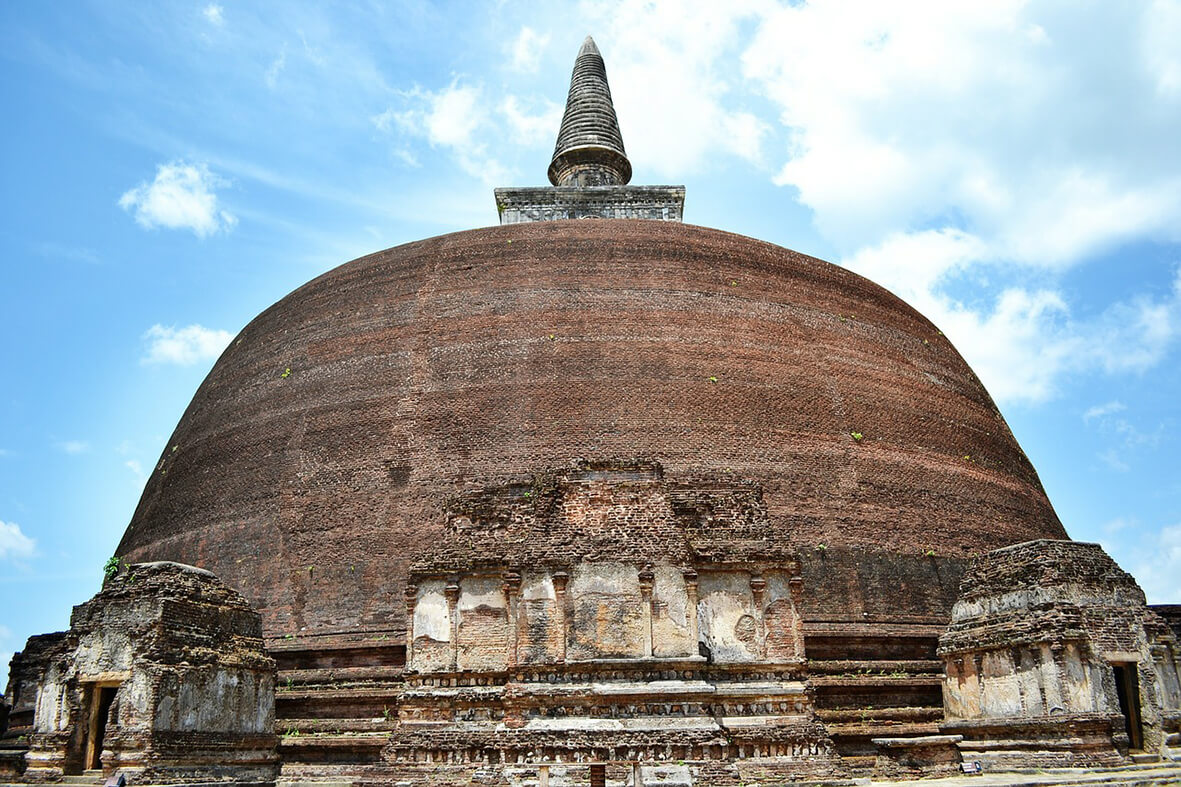 The Polonnaruwa archeological park sits as yet another testimony to the skill and knowledge of the Kingdom’s first rulers. This well-planned archaeologic relic city lies east of Sigiriya and is also a World Heritage site. The urban design winds through the natural setting. Hundreds of ancient structures including statues, tombs, temples and stupas await your exploration. Eight hundred years ago, it held the title of Sri Lanka's second capital from 993-1200 AD.

Once a bustling commercial and religious center, Polonnaruwa stretches out over 3km. A visit starts with a ticket purchase in the City Library. Then continue through the ancient palace, temples and the Quadrangle — an exemplary group of ruins. Once you circle back around, and if you still have energy on reserve, check out the museum. This building holds more details of the city’s history to include statues and even medical objects used at the time.

The city of Polonnaruwa is also a great place for wildlife spotting in Sri Lanka. Consider a visit to the Wasgamuwa National Park. This reserve provides strict wildlife protection. Animals such as elephants, bears, peacocks and leopards roam the lands. The Angammedilla National Park forest reserve sits opposite the river from Wasgamuwa. There, the dense forest, natural spaces and central water reserve offer a peaceful getaway. Finally, the Lake Parakrama Saudra is an ideal location for a relaxing cycle. Rent a bike, circle the water and enjoy a stunning sunrise or sunset view. 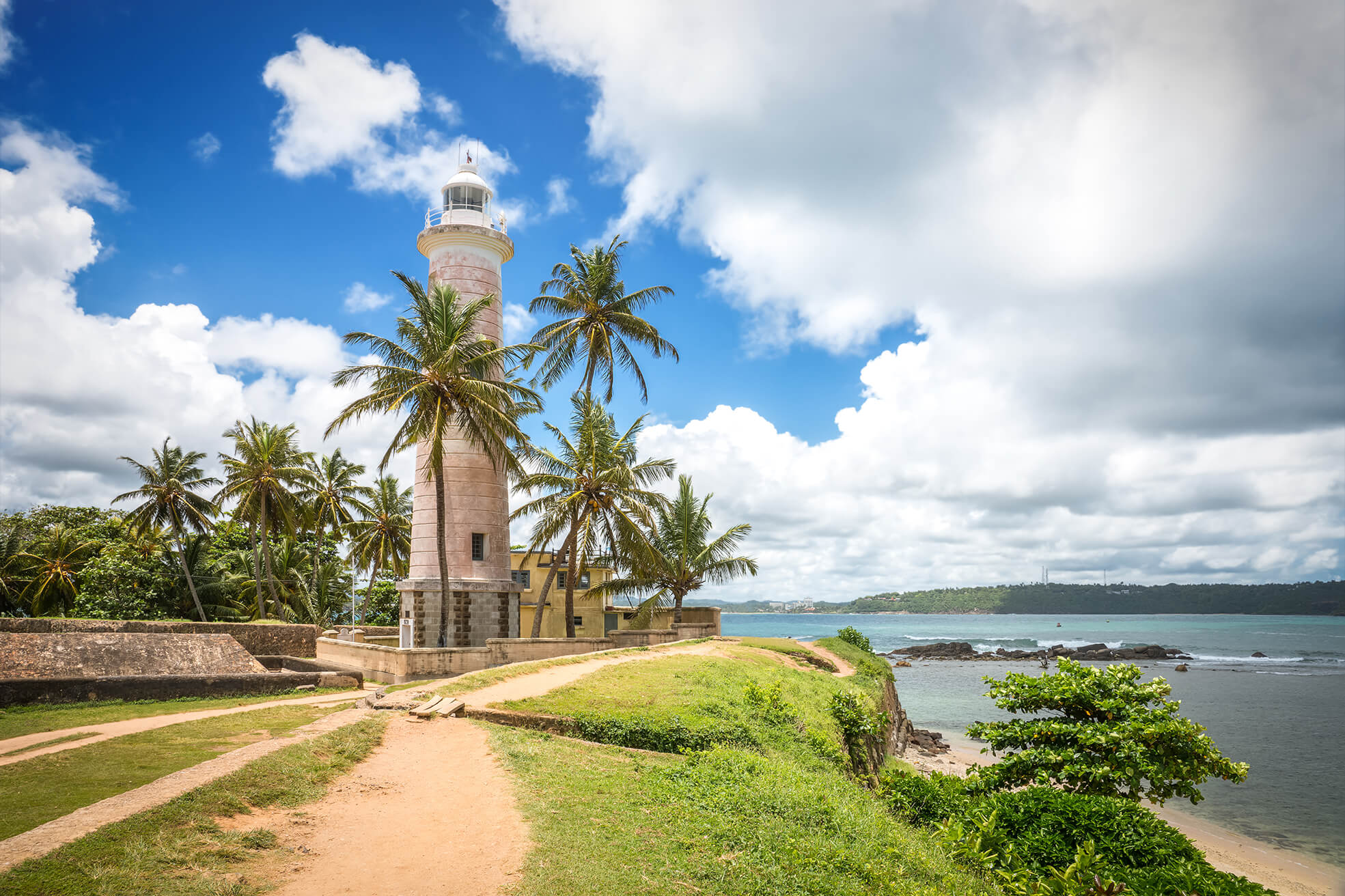 Forte Galle is another of the top 5 historical sites of Sri Lanka. A vital port hub of Sri Lanka for 200 years, Galle is a testament to the Portuguese and Dutch colonial periods. Located at the southwestern tip of the island, this city exists as the largest remaining European-built fortresses in Asia. You guessed it — another World Heritage site and it takes you on a trip to the island’s exotic past.

The Fort has a reputation for charming and captivating explorers. Thanks to government commitment to reconstruction, the structures stand solid and in great form. Spanning 90 hectares, the Fort starts in the north at the Main Gate and encompasses the entire peninsula south. The setting of old European buildings truly feels other-worldly. Situated in the tropics, they exist alongside an inspiring and colorful mix of religion and culture. It takes about 2 hours to circle the entire fort and the wall affords a fantastic view of the city.

The city recently underwent a renaissance. Hip and trendy cafes, bohemian boutiques and modern accommodations now dot the coast. When exploring, be sure to visit the lighthouse, Mosque, outdoor entertainment and sports areas, and the historic Dutch hospital. The western fortification walls make an ideal sunset spot to call it a day. 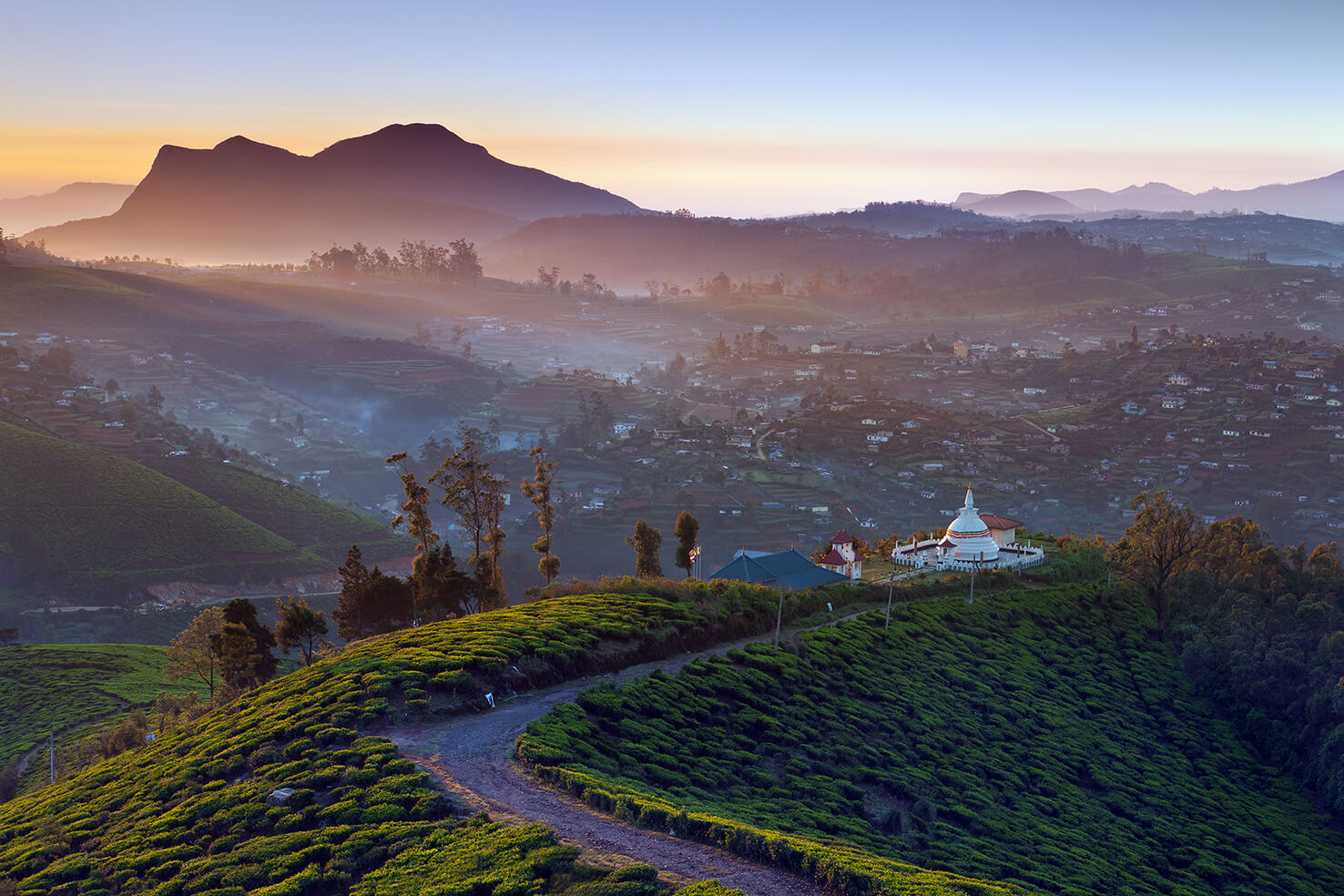 A place that makes you think time travel is possible. Nuwara Eliya, sometimes called “Little England”, dates its foundation back to 1846. The name means “city on the plain”, or “city of light”. It is uniquely located within a picturesque landscape and temperate climate. Here it is considered to be the most important location for tea production in Sri Lanka. Today, natives on holiday often frequent this destination. In the peak of flowering season, it coincides with Sinhalese and Tamil new year celebrations in April.

Nuwara Eliya is a hub of colonial British architecture. 19th-century buildings include a range of residential, or civil service buildings.

The country residence called  Queens Cottage (also known as the Lodge) sits within a 100-acre English-style nostalgic garden. It is a sophisticated bungalow built by the end of the 19th century. It became the seat of governors of Ceylon and their guests. Within its walls, the first draft of the first constitution of Ceylon was approved in 1947. The current tenant of the Lodge is His Excellency Maithripala Sirisena — the president of Sri Lanka.

Nearby, the Post Office station and the Hill Club stand picturesque in their antiquity. Beside the Hill Club sits the General’s House with an interesting history. Originally, the British General Officer Commanding occupied the mansion as a retreat house. Now it is the country residence of the members of Sri Lankan Parliament, and it reputes an eerie past. As the legend goes, an English Lady died in mysterious circumstances and they found her body in room number 16. Allegedly, those who choose to spend a night in her death room may still feel her presence today.

Engulfed in greenery, the town borders a wildlife reserve in the north, and Horton Plains National Park in the south. The latter park is home to some of the most breathtaking sights in Sri Lanka. The most stunning destination in the park is the World’s End, a 1200-meter-deep cliff. It overlooks a valley which forms a natural border between the Central and Sabaragamuwa Provinces. Just one kilometer away from the main cliff there is a second, smaller cliff of about 300-meter drop. Horton Plains also claims home to Baker’s Falls, a majestic 20-meter-high waterfall. It’s named in memory of Samuel Baker the explorer and founder of Nuwara Eliya.

Be it ancient ruins, old colonial towns full of character, majestic wildlife or the beautiful agriculture and charm of the locals — this country continues to fascinate travelers. Viewing the top 5 historical sites of Sri Lanka by bicycle makes it all the better! If wanderlust leads you to this magical island, be sure to check out our Sri Lanka tours first. We have a habit of helping people make amazing memories. See you on the trails!