Pchum Ben: The Festival of the Dead

Every year, Cambodia celebrates one of its two major annual festivals - Pchum Ben, known as the ‘Festival of the Dead’. A 15-day festival, culminating on the 15th day of the 10th month of the Khmer lunar calendar, Pchum Ben is a time when Cambodians pay respects to their deceased relatives of up to 7 generations. Top picture: Monks gathering alms during Pchum Ben in a Khmer Pagoda. Memorials to the dead at Wat Bo in Siem Reap

During Pchum Ben much of Cambodia shuts down as people return to their home towns and villages, in order to attend special rituals at their local family pagoda (Buddhist temple). Monks chant sutras in the ancient language of Pali throughout the night, without rest, in preparation for the opening of the gates of hell, when the spirits of the dead are thought to be especially active.

Cambodians, or Khmer people in their own language, are a nation that greatly values family ties. The name of the celebration: Pchum Ben, comes from a combination of words “Pchum”, which means “to gather together”, and “Ben”, a “ball of food”. Food is an important part of the celebration.

While most family members will only visit their homes on the three main days of celebrations, others will already start festivities by providing food for monks in their local pagodas up to 14 days before the main events.

Preparation of food: the sacrificial rice balls for the spirits, the food offerings for monks and that for the families themselves are always joined by the whole family. Sometimes, the whole communities gather in pagodas to collectively prepare the spiritual feast. Apart from rice, the second most popular spirit offering is glass noodles. It is believed that some spirits have small mouths - from the sins of bad-mouthing others, so the food needs to address this particular ephemeral feature. 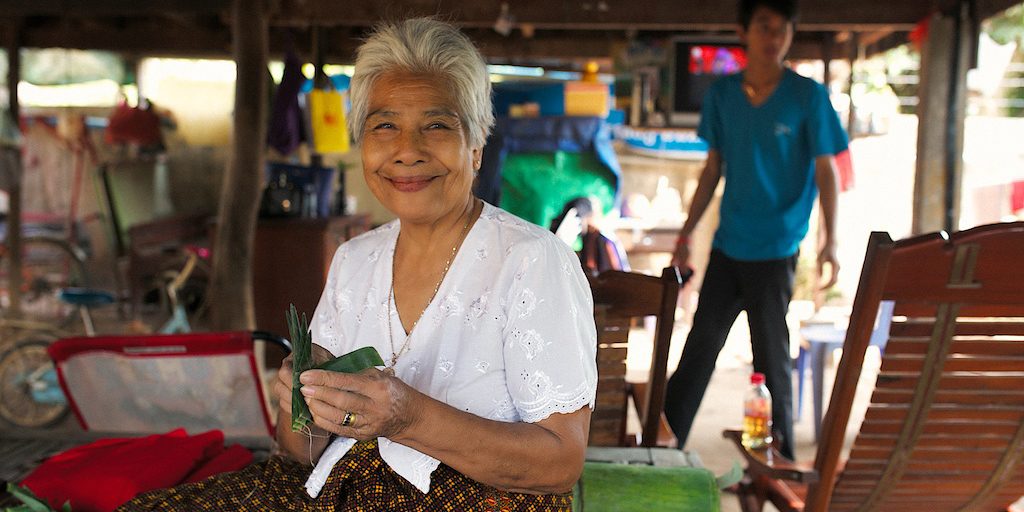 Men and boys are tasked with providing firewood for barbeques and outdoor kitchens, as well as meats for the feast. They also cut banana leaves that are later prepared and cut by girls to form impromptu plates or food wrappings. Apart from that, women cook, decorate houses and pagodas. Smallest kids help around with all these jobs, or sometimes - they disturb them :)

Dressed in white, Cambodians attend the pagoda to make offerings of food, intended to placate the dead and relieve their suffering in the afterlife. Gifts of food for the dead are made via monks, with some schools of thought believing the hungry ghosts can be directly nourished by the offerings, where more orthodox canon states that the merit gained by donors only indirectly benefits the dead.

At many pagodas, the orthodox merit-gaining plates and hampers of food received by the monks are accompanied by direct feeding of the ghosts in the form of rice balls thrown into the air at the temple, or rice grains thrown into an empty field in more rural areas.

Additionally, each Khmer house usually hosts a small shrine, called Neak Ta. Cambodians make offerings of food, notably rice, throughout the year, but for Pchum Ben the shrines receive many more offerings and are adorned with incense sticks and flowers. While birds and ants are the ones actually feeding on the offerings they are symbolically associated with spirits. The Neak Ta are a different kind of ghosts - they are protective spirits that guard homes against the hungry souls of sinners, which can only find offerings during Pchum Ben.

Pchum Ben is considered unique to Cambodia within the Southeast Asia region, although there are similar festivals celebrated in both Sri Lanka and Taiwan. With the Khmer Rouge era so recent in living memory, the festival is especially poignant to many Cambodians, who are keen to appease the souls of the many who died.