Ever wonder about religion and beliefs in Cambodian people? Read on to learn about the country’s dominant religions and how they are practiced in daily Khmer life. Then head to Cambodia and see for yourself!

History of Religion in Cambodia

When the Khmer Empire came to power in the ninth century AD, Hinduism was the official religion. It had been the case in that part of the world for generations. Rulers of the great empire worshipped Hindu gods such as Vishnu and Shiva, and dedicated the 12th-century temple of Angkor Wat to these beliefs.

It wasn’t until King Jayavarman VII, who ruled later in the 12th and 13th centuries, that Buddhism was fully introduced to the Khmer people. The temple of Bayon was the first in the Angkor complex to be built in the image of Buddha. Buddhism then infiltrated Khmer society through trade and interaction with nearby Southeast Asian kingdoms. Now, Buddhism is the most popular religion of Cambodia. 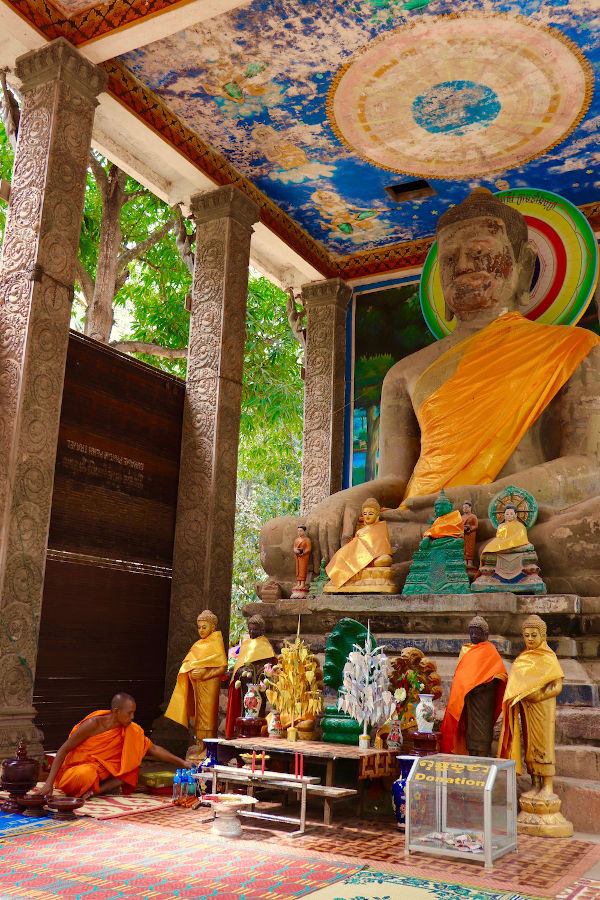 It is estimated that over 95% of Cambodia’s current population practice Buddhism. Not just any form of the religion, but specifically Theravada Buddhism. The chief goal of Theravada Buddhism is personal enlightenment, and this is achieved by a strict practice of meditation and conservative ways of life. Most young Khmer boys spend part of their lives as monks. In fact, any visit to Cambodia will reveal pagodas and monasteries in even the most remote villages.

While not all Buddhist Cambodians have a meditation practice, devotion to the religion is shown in other ways. Khmer often visit pagodas to pray at altars before statues of Buddha and receive blessings from monks. You will often see stands by the side of the road set up by monks to bless travelers on their way! Buddhism is also widely practiced with the celebration of local holidays and festivals. In addition to the Gregorian calendar, Cambodians also measure time with the Buddhist lunisolar calendar, especially when it comes to the observance of religious holidays.

While Cambodians celebrate the Gregorian New Year’s Eve and their own traditional holidays, a few days a year are set aside for Buddhist celebrations. To learn more about Cambodian holidays, visit this site.

The presence of Buddhism in Cambodia seeps into the country’s culture. Since Buddhism places high value on non-violence, as a visitor you will notice right away the gentleness of Khmer people. Cambodians are often non-confrontational, as they believe that everything you do in this life affects your karma for the next one.

Cambodians also have a culture of respect which comes from Buddhism. This can mean respect for elders, respect for monks, and respect for Buddha. In Cambodia, when greeting each other the hands are pressed together as if in prayer, and the higher you raise your hands when bowing to someone, the more respect you are showing them. This is also apparent in the different words in Khmer for addressing the elderly and monks, words that show more respect. When visiting a pagoda, it is also important to show respect to Buddha by not pointing your feet towards him. 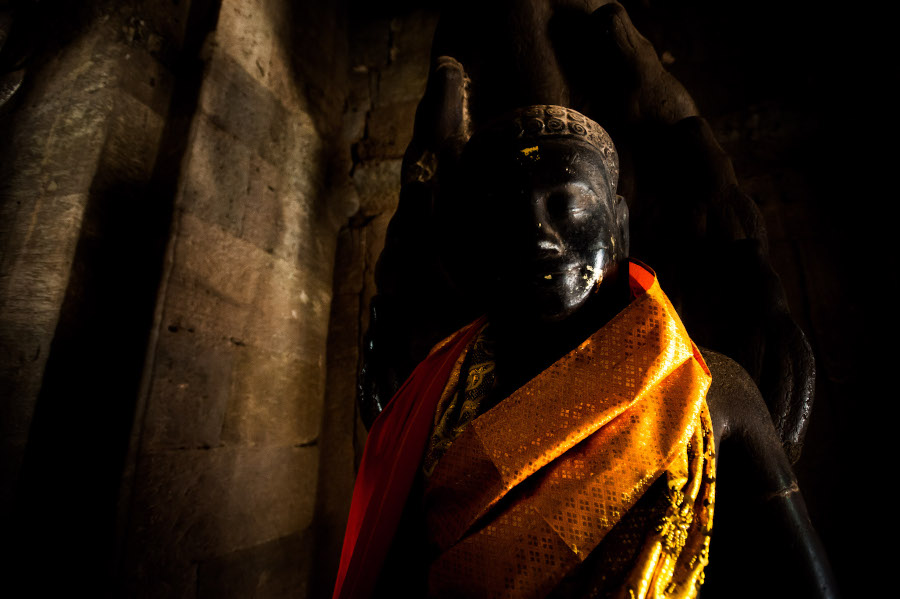 When visiting Cambodia, it is important to respect the conservative Buddhist culture. This means that when touring temples, be sure to cover your shoulders and knees. It is polite to take off your shoes when entering pagodas and homes. When faced with a statue of the Buddha or shrine, it is respectful to avoid pointing your feet in its direction. Learn more about etiquette when traveling in Cambodia here.

Islam is one of the main religions of Cambodia, although it’s estimated only around 2% of Khmer are practicing muslims. Much of this population is made up of the Cham and Malay ethnic groups, who are part of the Sunni branch of Islam. The Cham people populated a territory in Southern Vietnam called Champa until the 15th century. Malays came from Borneo and other parts of Indonesia.

Although many Muslims were targeted and wiped out during the Khmer Rouge times, around 500,000 remain in Cambodia, most of whom live in communities in Kampong Cham province.

Although it is estimated that less than one percent of Cambodians are Christian, this number is growing steadily. The first missions of Christians in Cambodia completely failed. Even the French colonization of the country in the late 20th century did little to convert Khmers to Christianity. Khmer of European descent or Europeans living in Cambodia make up the greatest percentage of Christians or inspired local communities.

While only half a percent of the Cambodian population officially practices folk religion, traditional animist beliefs are everywhere in Khmer daily life. Animism means the belief that all humans, objects, and animals have a spirit. Many Cambodians keep an altar in their home with which to honor the spirits of their ancestors, and often light incense and provide food for these spirits. Cambodian people are also very superstitious and go to great lengths to keep evil spirits and ghosts at bay. The Earth spirits that trade their protection for respect and honor are called Neak-ta.

Many of Cambodia’s holidays come from traditional beliefs and celebration of nature. One such celebration is the Water Festival, or Bom Om Touk. Celebrated each year in November, the Cambodian Water Festival marks the occasion of the change in direction of the Tonle Sap River. This festival was first celebrated as early as the 12th century, with the hopes for a successful fishing season and rice crop. Now the occasion is marked with boat races and carnivals, the largest of which is found in Phnom Penh.

Pchum Ben, typically celebrated in October of the Gregorian calendar, is a holiday dedicated to paying respects to ancestors. Locals prepare meals at home and bring them to nearby pagodas to feed both the monks and the spirits of their ancestors. This holiday usually includes a significant break from work so Khmer can travel to their hometowns and honor their origins.

Religion in Cambodia for Visitors

As a tourist in Cambodia, you will come across many traces of religion. A walk through any city or town will be full of the sight of pagoda spires. You will also be sure to pass by local religious events taking place in colorful tents with speakers blasting loud music. The best way to witness the effect religion has had on Cambodia is by a visit to the awe-inspiring temples of Angkor Wat. Glimpse the colors of sunrise over the spires of sacred temples, discover the hidden secrets and grand pagodas of Phnom Penh, or see for yourself how religion affects the daily lives of locals with a countryside exploration!