Grasshopper Adventures' Expeditions Engineer, Blair, was the first of our clan to visit Uzbekistan, and knowing little about it, arrived with nothing but an open mind...and soon after that a dose of culture shock!

Everyone knows where India and China can be found, and because of the troubles in the Near East the locations of countries such as Syria, Iran and Iraq. But in between and slightly north of these lands is a vast area referred to as Central Asia whose countries few can list by name. Can you?

My first pleasant surprise was the grandeur of the architecture in Uzbekistan's capital city, Tashkent. This thoroughly modern city makes some incredible architectural statements, worlds away from the communist monstrosities I was expecting.

Wandering the city hopelessly in awe (not to say hopelessly lost) I stumbled into the road and immediately a car pulled over. Shouting something in Russian and pointing down the road, the driver seemed to want to take me somewhere, but the child seat and shopping in the back of the car made me suspicious that this was not a taxi, so I waved him on. Later I was to find out that everyone in the city is a potential taxi driver and, due to the lack of crime there, it is quite safe and very convenient to use this opportunistic service.

This former state of the USSR is a fascinating mix of cultures. Before the Russian occupation in the 1920s, Uzbekistan and it's neighboring 'stans of Kasakh, Kyrgyz, Tajiki and Turkmeni were ruled by powerful Emirs with wide-spanning kingdoms that date back to antiquity. Their peoples roamed freely between nations in a semi-nomadic existence that survived in Silk Road trading. This leaves today's Uzbekistan (with its relatively new borders) with a rich multi-cultural tapestry of peoples that are all different, but who all share a historical stake in the land.

Although predominantly Islamic, Uzbekistan is not at all your typical Muslim country. Being a former soviet state and practicing a non-denominational form of Islam, the county is remarkably liberal; women dress in modern western fashions, as well as traditional dress, and men enjoy a cold beer after a day at work or a shot of vodka with their meal. You have to listen very carefully to hear a call to prayer as this is just sung as opposed to being broadcast on loudspeakers. Beards and burkas are certainly a rare sight.

I didn't know a great deal about Uzbek cuisine, and I certainly didn't have high expectations. I couldn't have been more wrong, however - food in Uzbekistan is fantastic and plentiful. Lunch and dinner are both at least three courses and are frequently accompanied by vodka. To start, fresh wheels of warm bread are torn and served with delicious, fine chopped, vegetable and herb salads. Next arrives the soup - chunks of stewed veg and meat, or sometimes the famous Russian borsch (beetroot soup). The meal culminates in the meat dish - tender skewers of lamb or beef, or sometimes the ubiquitous plov, a rice dish with peppers, chickpeas, and currants, topped with lamb or beef, which is boiled, fried and baked! Vegetarians beware! Every dish involves meat and lots of it. Even during the tour while camping deep in the Nuratau Mountains the food was of the highest quality and was lovingly prepared by our two cooks.

Although central Asia is synonymous with the Great Steppe, vast grassland and semi-desert plain that stretches from the fringes of Europe across Asia, deep into China and famously roamed and ruled by Genghis Khan and his horsemen, there are mountains that break up this otherwise monotonous expanse. These incredible rolling mountain-scapes, which seemingly rise up out of nothing, create some of the most accessible and achievable mountain riding in all of Asia! Wonderful short, sharp, climbs and long, flowing, trails. 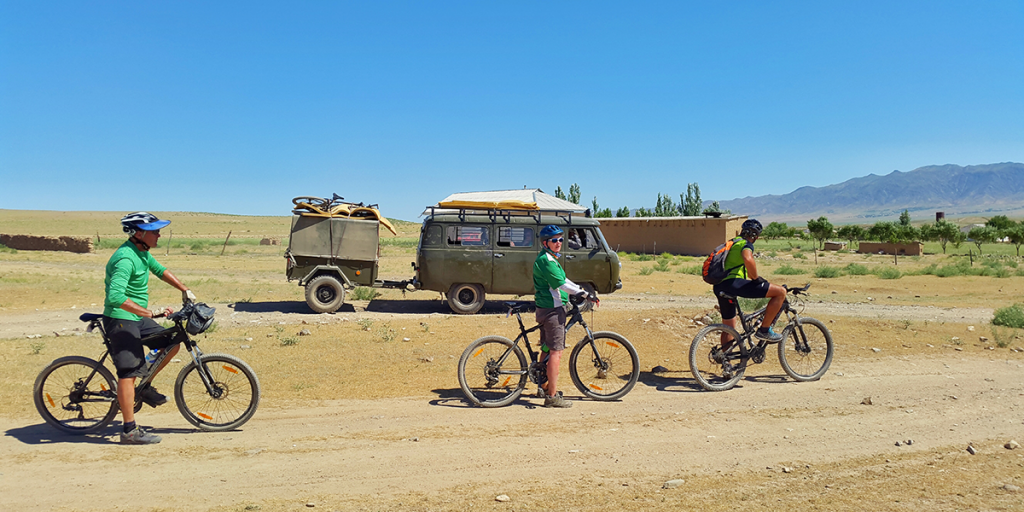 On the road less cycled

Situated on the crossroads of one branch of the ancient Silk Road, Uzbekistan is blessed with cultural sites to match its natural ones. The fabulous cities of Samarkand and Bukhara, names out of legend and which we visit as part of the "Uz-biking-stan" tour, were important stops on this mighty trade route, forming a link between Europe, India, and China and quickly became centers of commerce and power. Both UNESCO World Heritage Sites, the centers of these cities are beautifully preserved.

Uzbekistan is truly rich, not merely in terms of natural resources like gas, oil, and uranium, but also in culture, landscapes, crafts, and history. A true undiscovered gem. "