Steve Mojica and his daughter have returned with their latest adventure in Japan. They have once authored a guest piece about their Father-daughter ride in Vietnam and we are happy to host them on our blog again. This time they went on a self-guided adventure, Cycle Kyoto to the Coast. 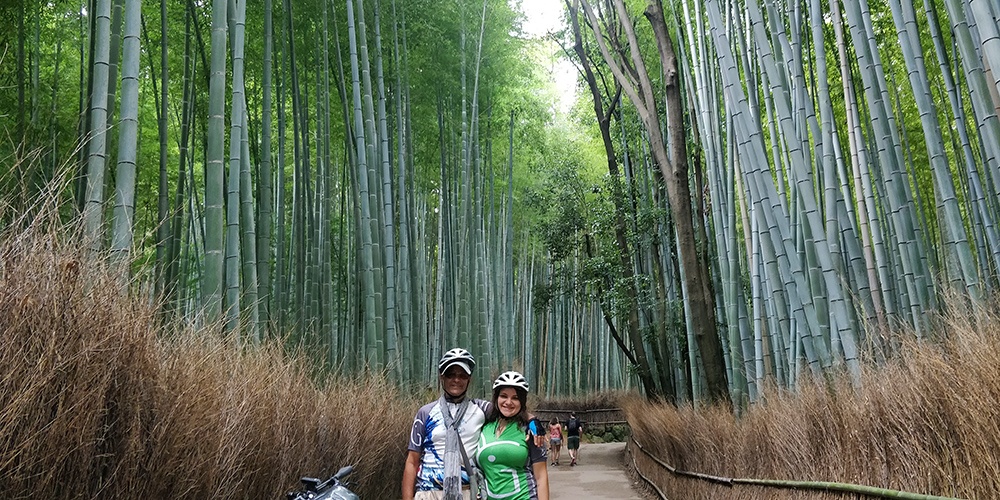 Me and my daughter at Arashiyama Bamboo forest

I had much trepidation about the self-guided bike tour in Japan with Grasshopper Adventures. I ride my bike daily but not long distances, perhaps one time a week for 40km. If a tour meant 5 days in a row of 30-60km, I wondered if I could really have that endurance. Maybe that doesn’t seem like a lot to some cyclists, but for this 68-year-old who has only gone on a few long-distance rides, it was concerning. Because I live in a place where there are no hills, the idea of climbing worried me. Also, I’d always thought of Japan as being super crowded and more expensive than my budget. Thankfully, all of these fears were put to rest once I started my tour. 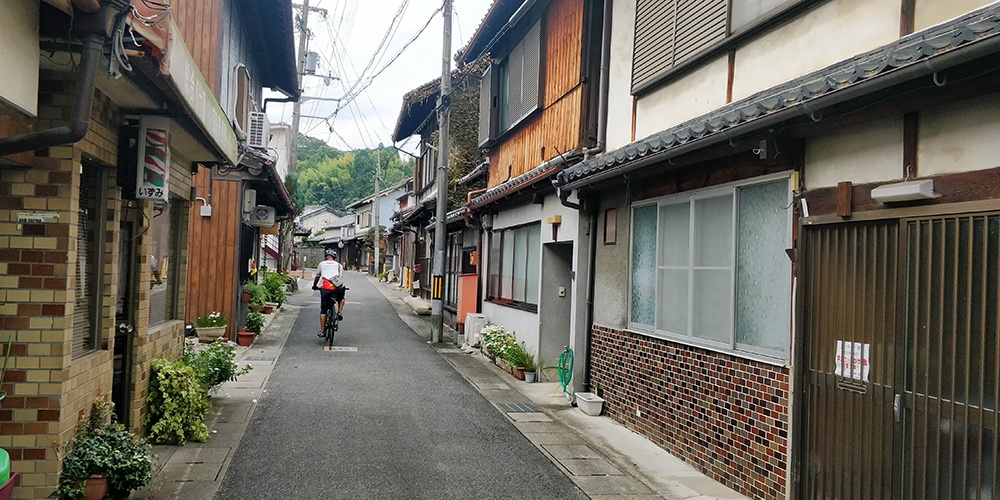 Japan turned out to not be packed with people. I was riding with my daughter and often we both wondered where everyone was. Some towns and villages we rode through felt deserted. In the larger urban areas there were people, of course, but not the teeming crowds I thought we’d encounter. The food was fabulous, not expensive as I feared, and easily accessible. Yes, there were hills, but fortunately, the steep ones were not long and overall none were terribly difficult. I found if I took a short rest along the way that I could tackle the climbs without collapsing. Finally, my fear that 5 straight days of riding would be overwhelming was again unfounded. Perhaps the beauty of Japan, the food, the excellent accommodations, the quality bike, and adrenaline kept me going without feeling exhausted. 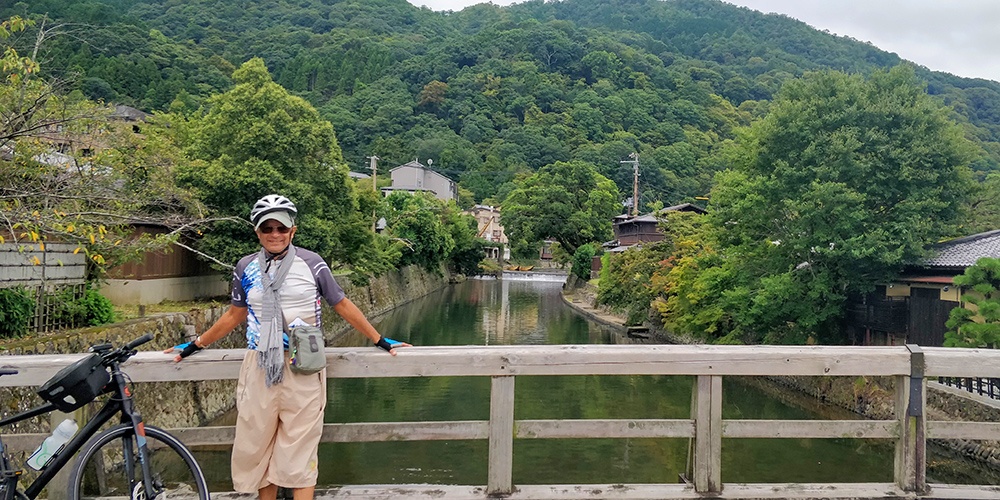 Our 5 days of riding were just fantastic. The roads and bike paths were in excellent shape throughout the ride. The few times we rode in traffic, the cars were few and courteous. We very much enjoyed the initial ride around Kyoto, in fact, we cycled a bit longer than scheduled just to explore more of the city. Japan is so green! I loved seeing the many shades of green- the rice fields, persimmon orchards, lush hills and flora I haven’t seen before. The persimmons bought at roadside stands were delicious. Traveling by bike is such a wonderful way to visit the temples, the historic and cultural sights in Japan. I admit we wimped out of the last leg/climb to Mount Koya and took the train. I love trains so it was a treat and easy to negotiate.

Being an old fart and technologically challenged, my daughter did most of the navigating with the Wahoo ELEMNT. However, she struggled with a bad cold during the ride and opted out of the last day of our ride. I have to admit I am proud of figuring out Wahoo without her help. If I can handle the Wahoo device, it’ll be a walk in the park for anyone else! 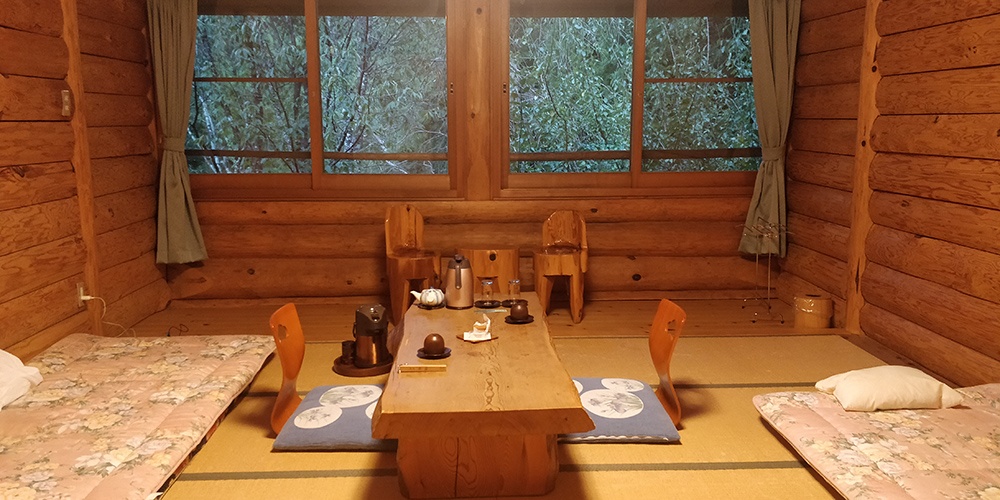 I thought I would lose some weight on this ride but I did not. I blame Grasshopper. The accommodations were great, from the mountain town of Yoshino with hot springs bath to the Inn within a Buddhist temple in Koyasan-they couldn’t have been better. The food provided at the hotels was delicious and plentiful. So be careful, or you’ll actually put on a pound or two. Really I travel to eat so I was not disappointed with the many feasts provided. Unlike what I’m used to in convenience stores back at home, the many stores we encountered carry healthy, tasty snacks, and there seemed to be beverage vending machines around every corner. 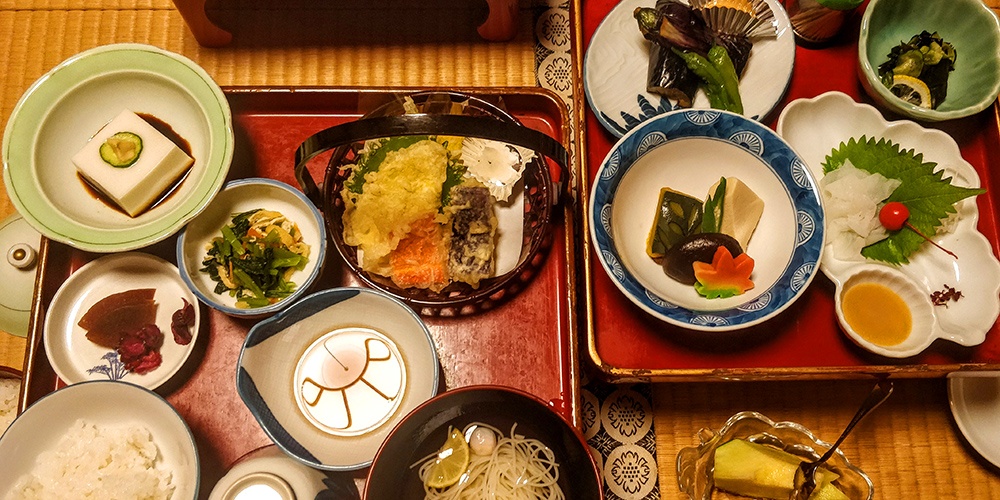 Grasshopper Adventures knows how to end the trip for riders. In Wakayama we relaxed in a luxurious hotel had a wonderful dinner in a restaurant nearby, with lots of choices in the area. The breakfast buffet was well stocked and delicious with a view of an ancient castle. We visited a museum in town and easily found our way to the train station to bring us directly to the airport.

Cycle Kyoto to the Coast - Self-guided

A Sip of Ceylon Self-guided