REGISTER
7 Books That Inspired Us to Travel
Home / Blog ArchivesHere

7 Books That Inspired Us to Travel

An excellent book can take us on some incredible adventures. Our imaginations surpass even what today's advanced cinematic technologies can offer. Sometimes, this leaves a longing to experience another culture, a break in the norms, a tactile adventure in real life. Here are 7 books that inspired us to travel or that made a great travel companion in the midst of it. 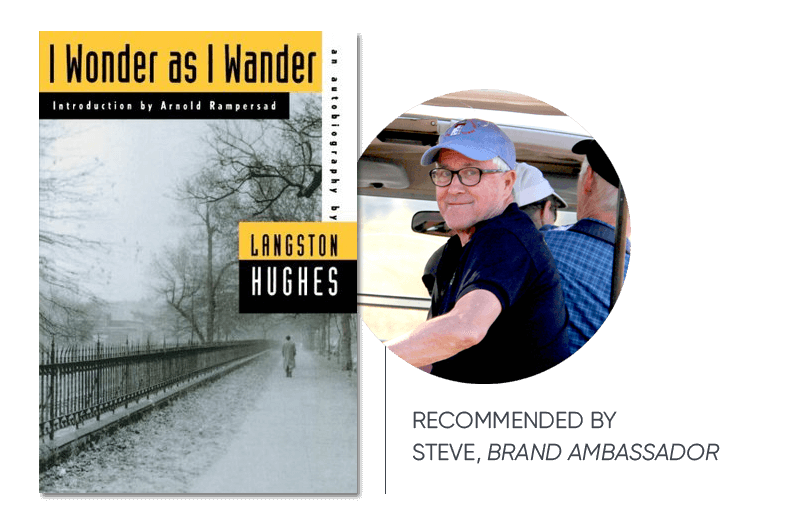 I Wonder as I Wander: An Autobiographical Journey
by Langston Hughes

Langston Hughes, an African American author, vividly recalls the most dramatic and intimate moments of his life in the turbulent 1930s. His wanderlust leads him to Cuba, Haiti, Russia, Soviet Central Asia, Japan, Spain (during its Civil War), through dictatorships, wars, revolutions.

"In the summer of 1973, I was offered a position with the Canadian Youth Hostel Association as 'House Parent'. I managed a remote cabin shelter near the Columbia Icefields, in Jasper National Park. Two years earlier, I had hitchhiked from my home in St. Louis (Missouri) to western Alberta. I hiked the Canadian Rockies and used the hostels for shelter when camping was impractical. The houseparent job consisted of opening 3 cabins at 5 pm, collecting $1 per guest, and then kicking everyone out at 8 am. I was great at that! About this book? Before leaving for my assignment I spoke with several friends from university and asked for readings recommendations in isolation. Hughes’ autobiography was an inspiration. Known primarily as a poet, he was also an ardent, dedicated social activist and brilliant long-form writer." 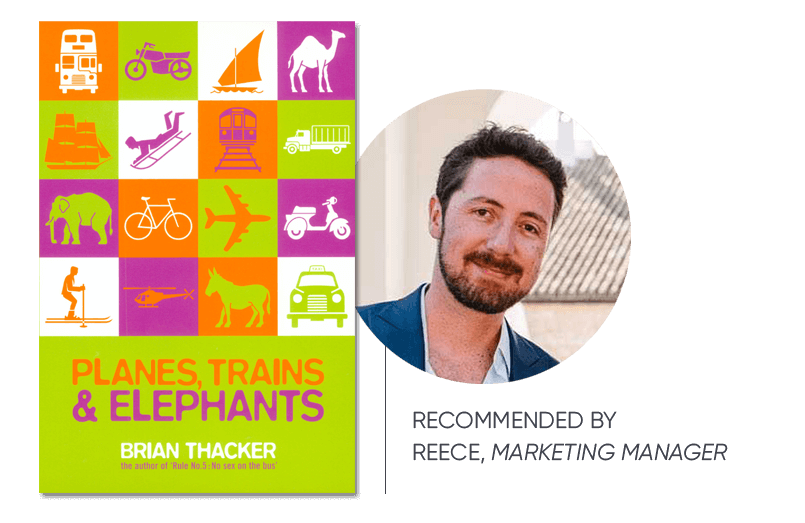 A serial traveler shares his entertaining, amusing, absurd, and often crazy stories from various modes of transport across the globe. He goes from hitchhiking up the east coast of Australia to taking a helicopter over the  Grand Canyon in the USA. He even takes a camel ride in the Sinai Desert in Egypt. Each of the 27 short chapters offers a new adventure (or ordeal) on a different mode of transport in another part of the world.

Why Reece picked it:

"It was a tough choice to narrow this down to just one book. The temptation is to go for something rich and poetic about the wonders of travel and life on the road, but I have gone in quite the opposite direction. Don’t expect heady literature here. Brian provides a collection of fairly light and compact stories, which mix a cheeky sense of humor into some often bizarre scenarios. From memory, this is one of the first books I read that was very literally about travel, although it certainly wasn’t the last. It inspired me to step out of my comfort zone more often when exploring new places. This is an easy book to pick up and put down when you need a little entertainment or escape, and for this (possibly inspired) reason it’s well suited to read while traveling or commuting."

"Anything by Bill Bryson. I couldn’t leave here without mentioning one of my favorite authors. He has written many 'travel' books although they are quite different from what you may expect of the genre. He has also branched far beyond this in fairly unexpected but very successful ways." 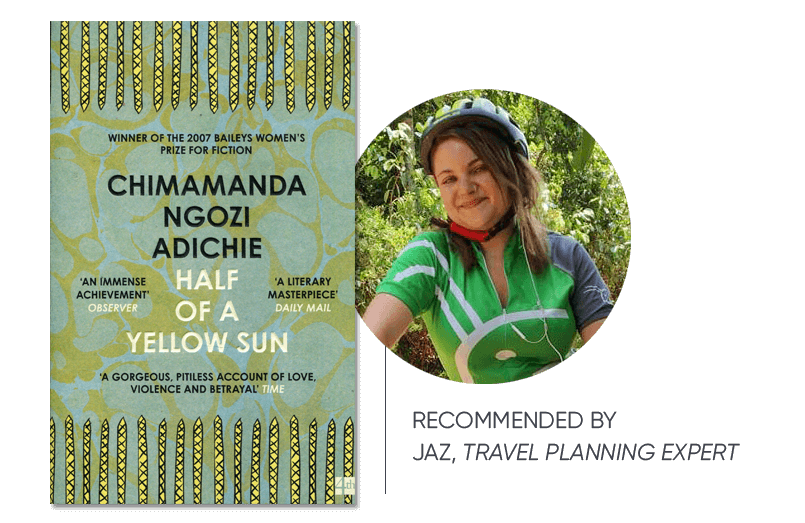 Half of a Yellow Sun
by Chimamanda Ngozi Adichie

With astonishing empathy and the effortless grace of a natural storyteller, Chimamanda Ngozi Adichie weaves together the lives of three characters swept up in the turbulence of the decade [1960s Nigeria]. Thirteen-year-old Ugwu is employed as a houseboy for a university professor full of revolutionary zeal. Olanna is the professor’s beautiful mistress, who has abandoned her life of privilege in Lagos for a dusty university town and the charisma of her new lover. Richard is a shy young Englishman in thrall to Olanna’s twin sister, an enigmatic figure who refuses to belong to anyone. As Nigerian troops advance and the three must run for their lives, their ideals are severely tested, as are their loyalties to one another. Half of a Yellow Sun is a remarkable novel. It encompasses moral responsibility, the end of colonialism, ethnic allegiances, class and race, and the ways in which love can complicate them all.

Why this inspired Jaz to travel:

"Although this book isn't really about travel at all, it transported me to a completely different world. What draws me to travel is learning more about the world and engaging with cultures that are completely different from my own. Also, I travel to gain a better understanding of broader systems that impact people's lives. (Well, that plus the food!) Of course, the best way to do all this is to meet and connect with people. Sometimes I'm unable to catch a plane, yet craving a journey to a different land. Then, reading about someone with vastly different life experiences than my own is a great alternative adventure." 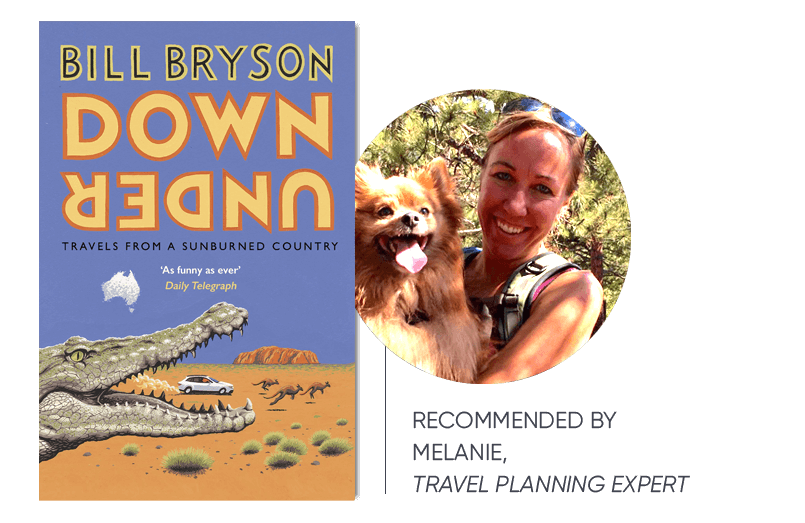 "I tend to read books about stories that have happened to people in history in those countries when I go. I enjoy memories of life that allow for a personal perspective of a country." Here are her current top three:

Down Under: Travels in a Sunburned Country
by Bill Bryson

Despite the fact that Australia harbors more things that can kill you in extremely nasty ways than anywhere else, including sharks, crocodiles, snakes, even riptides and deserts, Bill Bryson adores the place, and he takes his readers on a rollicking ride far beyond that beaten tourist path. Wherever he goes he finds Australians who are cheerful, extroverted, and unfailingly obliging, and these beaming products of land with clean, safe cities, cold beer, and constant sunshine fill the pages of this wonderful book.

"In 2001, when I was traveling Australia, I read In a Sunburned Country by Bill Bryson. It gave me a perspective of a country as I was experiencing it myself. He wrote in a way that opened up my thoughts. It gave me ideas of how I wanted to see Australia in my own way."

When a Crocodile Eats the Sun
by Peter Godwin

After his father's heart attack in 1984, Peter Godwin began a series of pilgrimages back to Zimbabwe, the land of his birth, from Manhattan, where he now lives. On these frequent visits to check on his elderly parents, he bore witness to Zimbabwe's dramatic spiral downwards into the jaws of violent chaos. Yet, long after their comfortable lifestyle had been shattered and millions were fleeing, his parents refuse to leave. They stayed steadfast in their allegiance to the failed state that has been their adopted home for 50 years. Then Godwin discovered a shocking family secret that helped explain their loyalty.

"I went to Zimbabwe in 2012 and read a few books of Peter Godwin's by recommendation. When a Crocodile eats the Sun really gave me insight into the history of white people in Zimbabwe. It explored how the government took the farms away from them and the disruption that happened to the country as a whole."

Burning slums and five-star hotels, romantic love and prison agonies, criminal wars and Bollywood films, spiritual gurus and mujaheddin guerrillas. This huge novel has the world of human experience in its reach, and a passionate love for India at its heart. Based on the life of the author, it is by any measure the debut of an extraordinary voice in literature.

"In 2020, I finished Shantaram by Gregory David Roberts. It took me a while to read. It was about an Australian who escaped from prison and found himself in Bombay, India, working in the black market. Set in the late '70s, it transported me to the busy streets of India and fascinated by his story. It's possible that Apple TV may be making a series out of it." 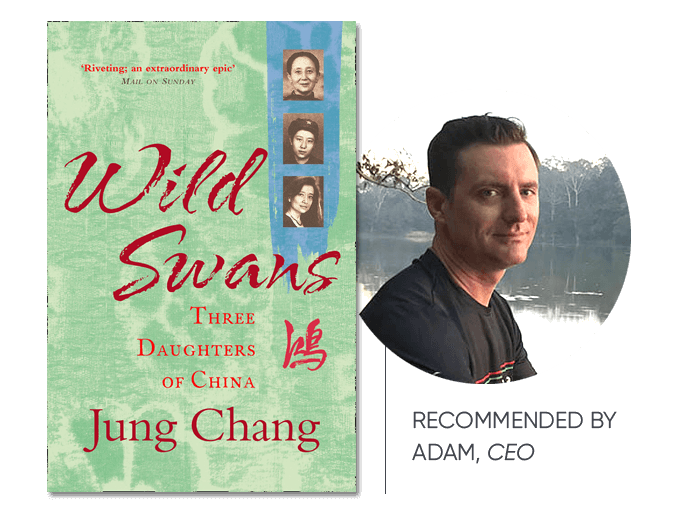 (Wild Swans) is an engrossing record of Mao’s impact on China, an unusual window on the female experience in the modern world, and an inspiring tale of courage and love. Jung Chang describes the extraordinary lives and experiences of her family members. Her grandmother was a warlord’s concubine, her mother who struggles as a young idealistic Communist, and her parents' combined experience as members of the Communist elite. Chang was a Red Guard at the age of fourteen, then worked as a peasant, a “barefoot doctor,” a steelworker, and an electrician. Chang captures the cycles of violent drama visited on her own family, and millions of others caught in the whirlwind of history.

Why it inspired Adam to travel:

"I love absorbing history in the form of memoirs and stories. With a short attention span, I find dry history books are hard work. Tearing through this book, I found it an incredible read. Immediately, I was inspired to go and see the country at the center of the story. That spurred me to sign up for a bike ride in China in 2003. I was not disappointed and found China fascinating. Upon my return, I read another 10 or so books on the country. Most of them were related to the pre-WW2 period, the Mao period, and the rapid transformation of the '90s onwards. That trip in 2003 was the inspiration for much of the travel that I've undertaken to many countries since."

Carve out a bit of time each day or each week and reap the benefits of a good book. If it does motivate you to explore, we’re here to help you start. Feel free to explore some tours and plan ahead. In the meantime, maybe grab one of the books from this list of books that inspired us to travel and see how it fits!