What a journey these 15 years have been! Great pictures are added to our library often, and some bring particularly special memories to mind. We recall awe-inspiring natural wonders and unique people and situations on these cycling adventures. There's never a dull moment. Join us in exploring these select images and the tales behind them from 15 years of memories. 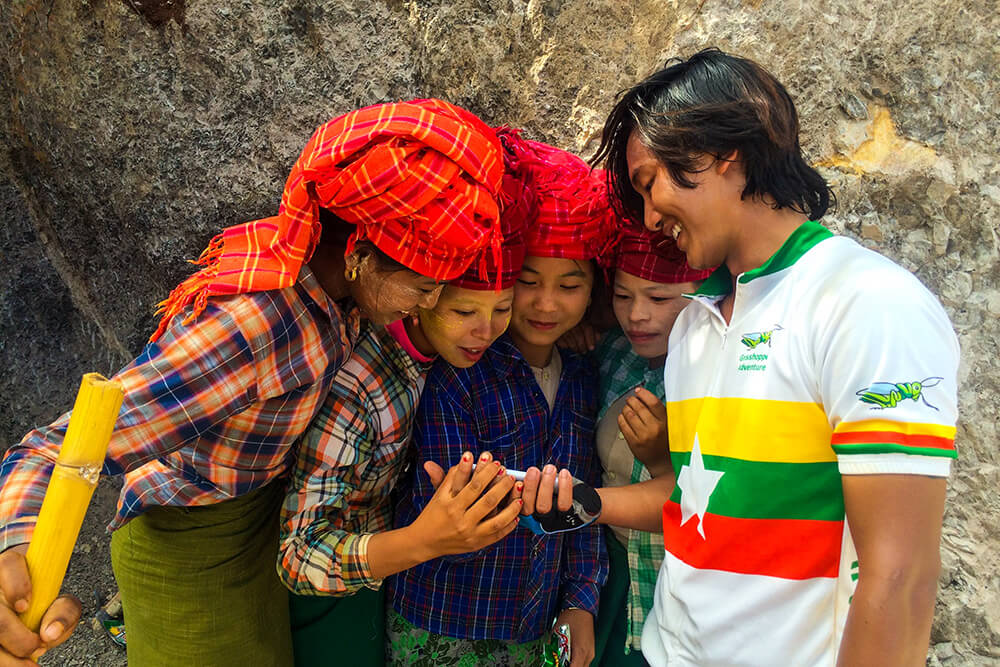 Myanmar based tour leader, Chan Nyein, shares an image with some curious Shan (ethnic minority) ladies on tour following the road out of Pindaya in the Inle/Shan area. These hardy ladies dig lime-rich gravel out of a small quarry. They mix the gravel with cement and set it into compressed, non-fired bricks. These become the main building material for houses in the area. Riders often remark on these buildings as they look like something out of the North American countryside.

2. Sheryl and the Birds 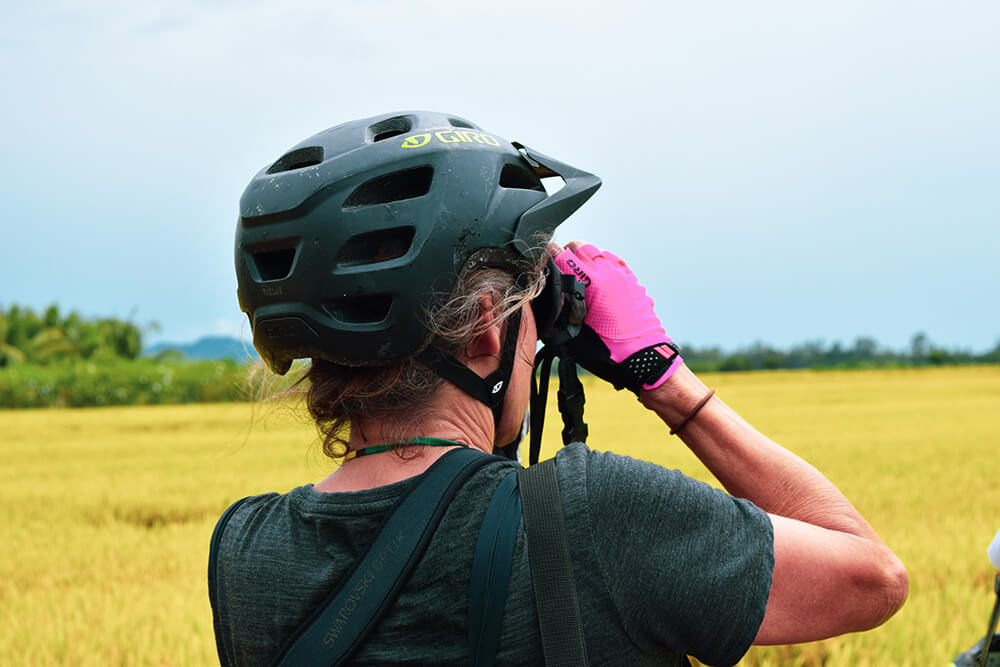 Being part of a group tour means we also get to experience each other's interests and see new things from another’s perspective. An avid bird-watcher named Sheryl joined a Mekong Bike and Boat tour. Binoculars around her neck and bird book nearby, no feathered friend went unnoticed. At every rest stop and during our river coasts, she recognized familiar songs. On our ride through the wildlife sanctuary heard every new tweet. Soon enough, each of us noticed whistles and calls that would have otherwise been missed. Her excitement over finding a new bird and her extensive knowledge of the bird-world affected our group wonderfully. We all walked away with a bit more appreciation in that area.

3. Scene of the Crime 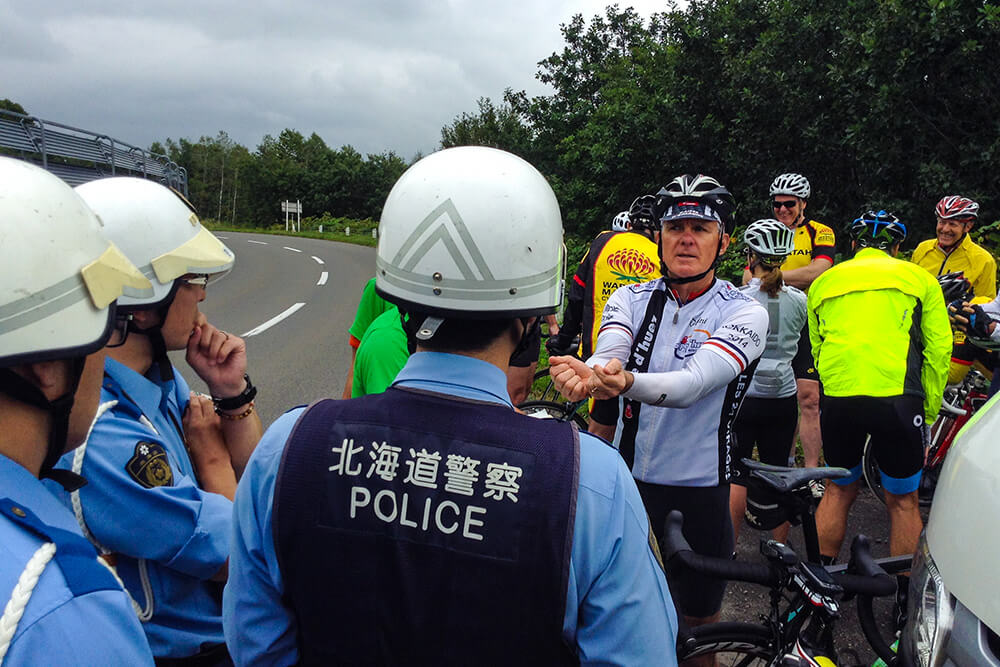 It was the second day of riding on our inaugural Hokkaido tour. The group was all strong riders and everyone was on their own ride bikes. We were moving at quite a clip. As we came over a rise, someone tapped the brakes and someone behind went down. I can’t recall who tapped the brakes, but I don’t think it was Chris (man offering wrists to the police). It was more a case of him acting as the fall guy. It was all in jest. The police came because we called an ambulance. A police car always accompanies an ambulance for roadside issues. The victim, Karen, battled it out in a wheelchair for 3 days before she went home to Sydney. She had a few breaks. 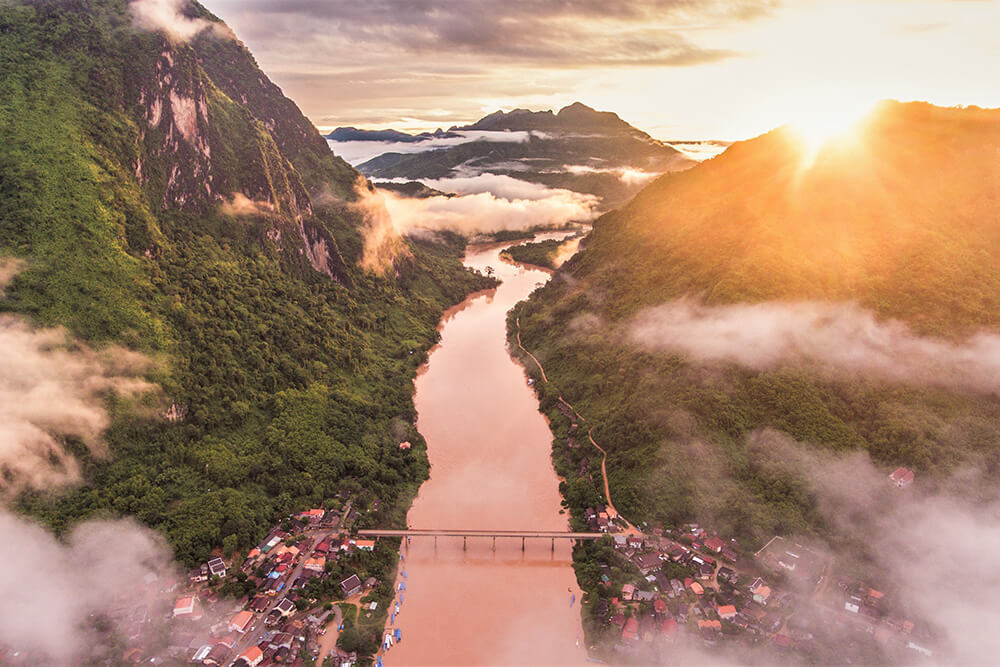 We sent Nguyen, one of our tour guides from Vietnam, as a photographer on a trip to Laos. Nguyen dabbled in photography alongside his tour guiding. He was leading trips and sending more and more spectacular images into our office. Suitably impressed, we sent him along on his first trip to Laos with a camera and drone in hand. His sole mission was to capture the magic of this country in some still shots. The result was a fantastic gallery of images from northern Laos. Two favorites are here — the first is a spectacular sunset shot captured by drone in the dramatic mountain scenery Northern Laos is well known for. We have seen lots of beautiful shots of sunsets and mountains, but to this day Nguyen’s is still a favorite.

5. Talent Discovery - Riding with the Buffalos 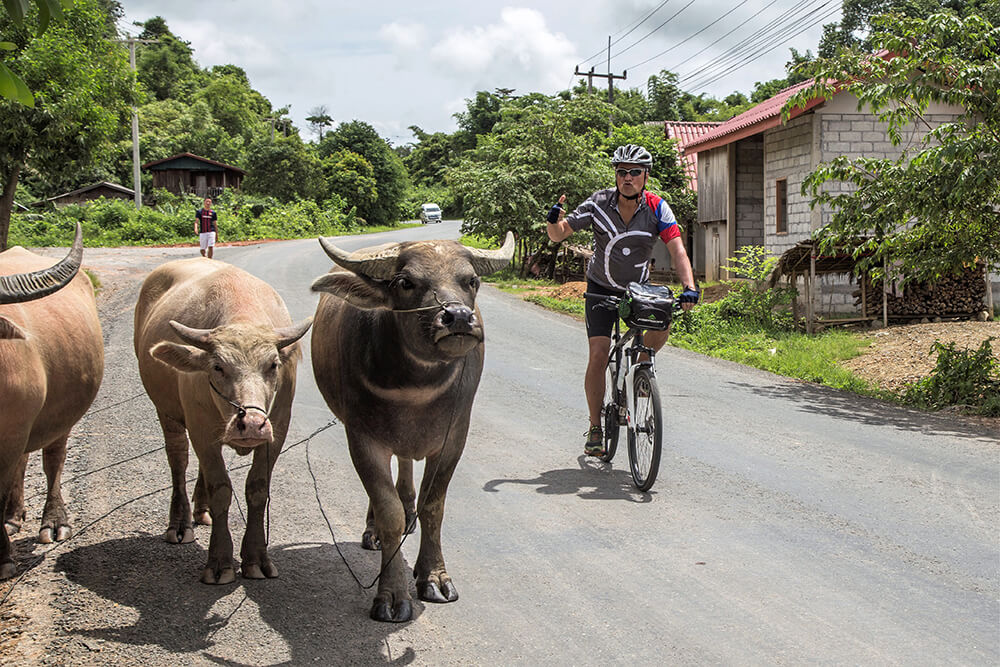 Another favorite from Nguyen’s gallery is this rider with local buffalo. In this typical roadside scene with water buffalos, you can see Laos is not all about mountain-scapes. It’s a playful shot that captures some of the simplistic charms of everyday life in much of Laos. 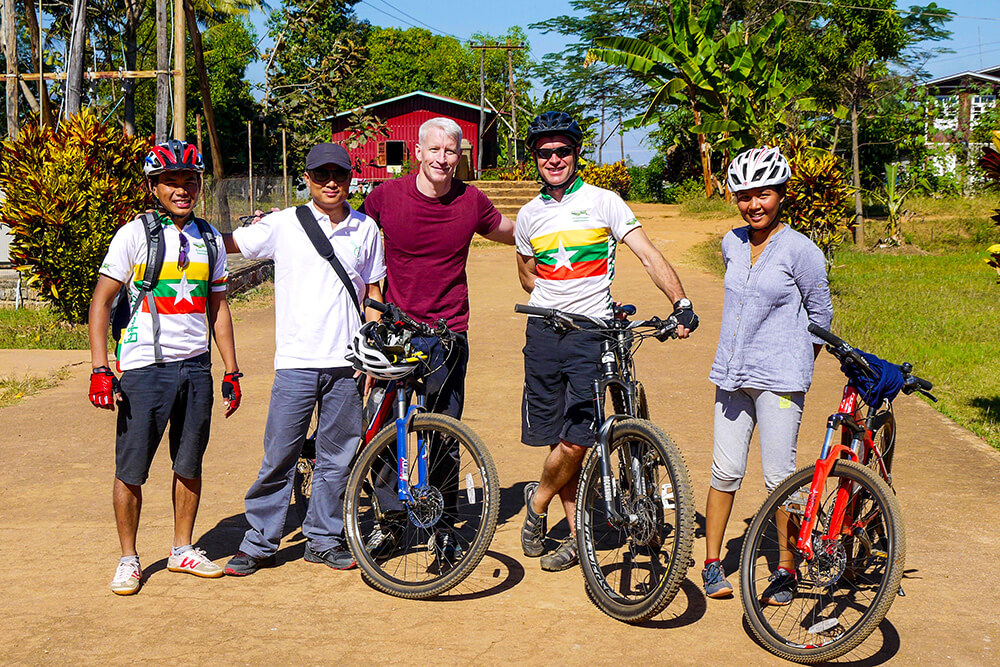 One of our 15 favorite memories includes a celebrity. Team Myanmar was a little star-struck after a visit from journalist and tv personality Anderson Cooper, who joined us on our Bike, Boat & Kayak tour at Inle Lake, Myanmar. It was an absolute joy to have him along for the ride!! A genuinely nice guy and, not surprisingly, he has some fascinating tales of his own. Thanks for joining us, Anderson. 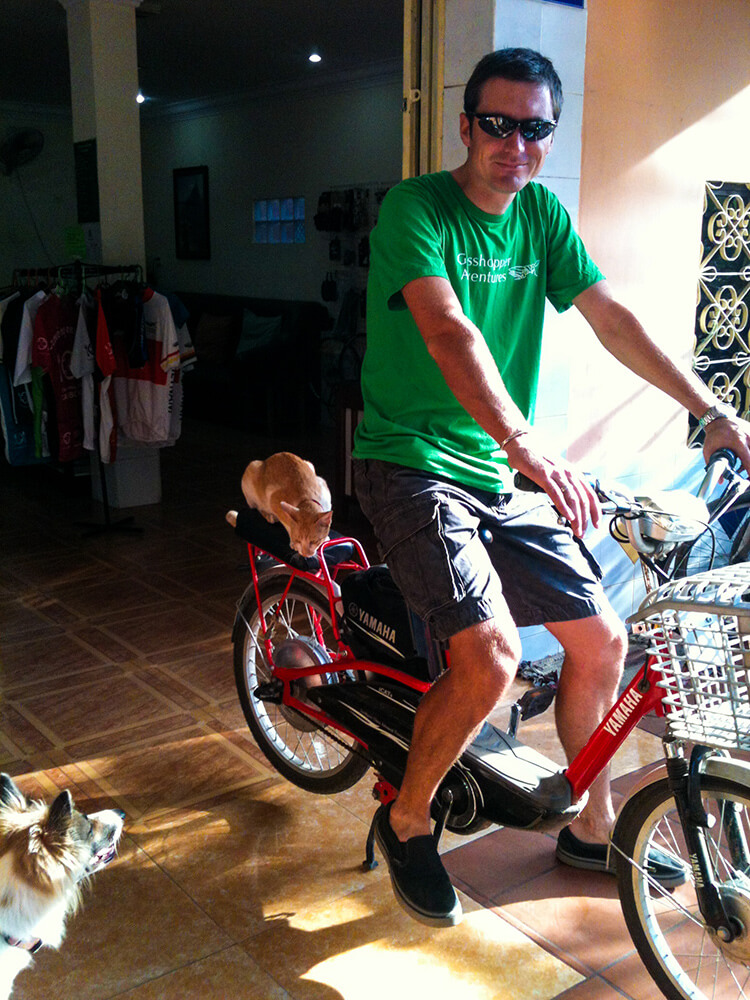 This was taken at the entrance to our day tour shop in Siem Reap. When it was first opened, Adam (Grasshopper CEO) and his wife, Marie, lived above the shop in two small rooms and had two cats and a dog. The dog was completely mad but was good security for suspect looking passers-by and the customers always enjoyed patting her. The cats draped over the customers’ laps. Sometimes they stretched out on the customer service desk, interfering with the keyboard. On this particular morning, Adam wanted to zip out to the mart to pick up some yogurt. The red cat jumped on board, clearly also wanting something from the mart. Probably out of envy, the dog chased the cat around the place like mad only 10 seconds later. The red e-bike was purchased just a few months earlier. A participant in a charity challenge ride suffered from MS and could do the ride with her daughter on the e-bike. It came in handy, but the e-bikes now are so advanced that they are almost unrecognizable from this antique. 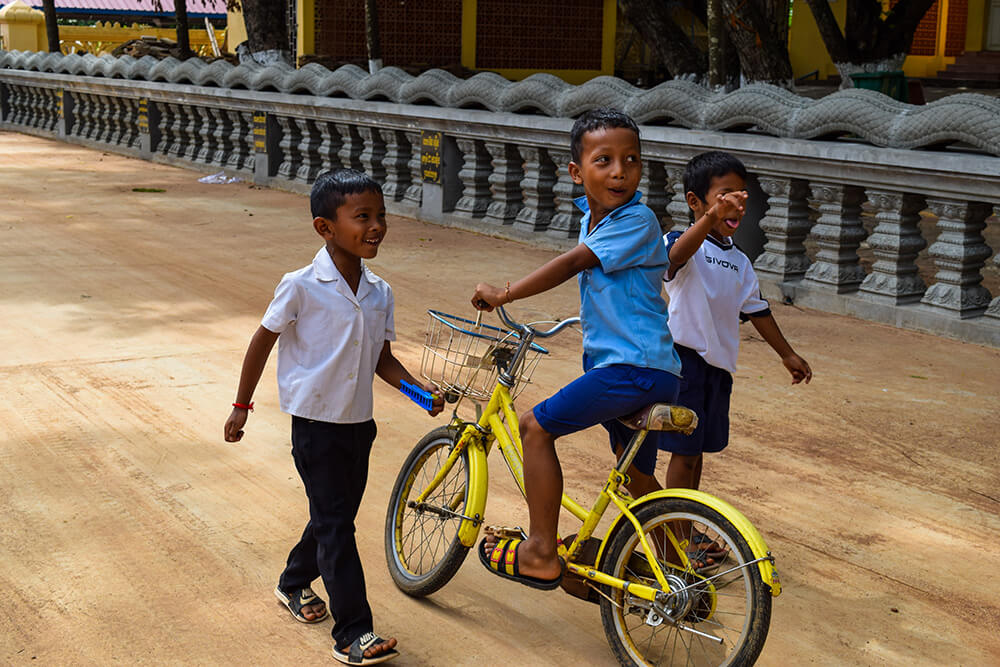 Children really impact 15 years of memories. Local children get very excited when a group of foreign cyclists, decked out in colorful gear and sporting friendly smiles, come streaming through their village. Nowhere is this more true than in Cambodia. They call "hello" from their simple thatch homes set back away from the road. Some run to line up along the trail as you navigate the red roads and palm trees. Others ride their own bicycles on the way to school or to the rice fields for some fishing. Their contagious enthusiasm and high-fives leave both sides feeling like something special just happened. This was a particular little group of rambunctious boys. They just finished giving their biggest high fives and silliest faces to the most mischievous rider of our group. 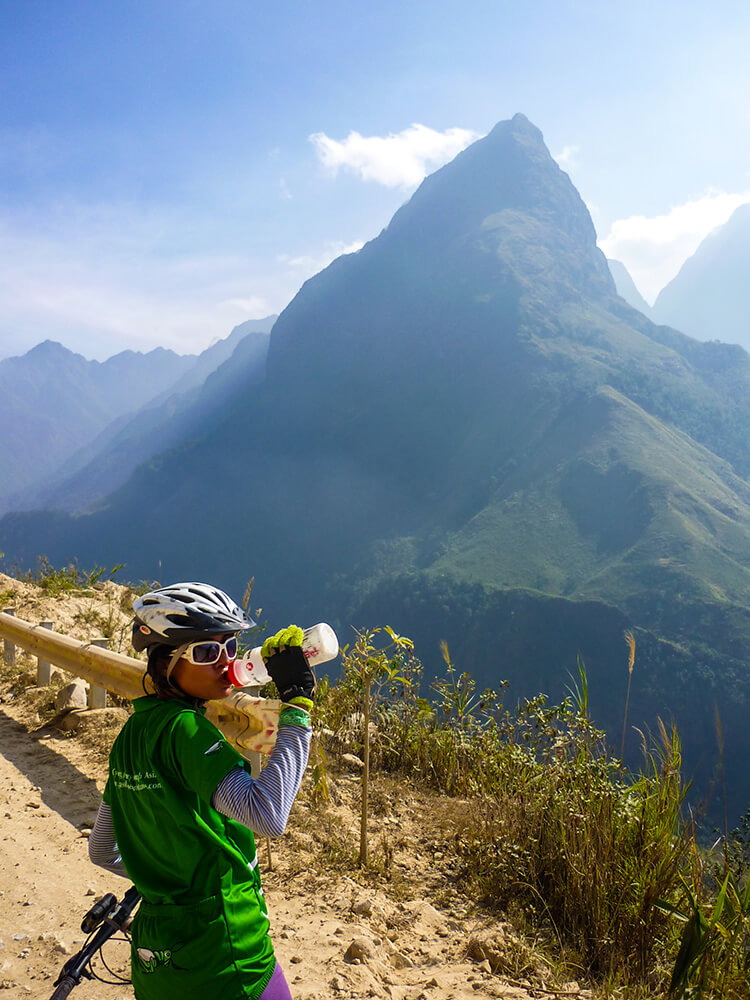 Marie stopped for a drink overlooking Fansipan, Indochina's highest peak. She and Adam were accompanying a tour of a small group of people who would eventually become close friends. This was still the early days of Grasshopper and the last day of a tough, now discontinued, tour which started in Laos and finished in Northern Vietnam. Many parts of the journey existed over truly rugged terrain, and each day typically involved a minimum of a 25km hill-climb. The descents rewarded us kindly. On the last climb of the tour and after many nights in rustic rural accommodation, everyone needed several weeks rest. The brilliant ascent up, switchbacks and winding roads lasted for about 30km. Adam did this climb about 8 times previously yet this is the only time he ever caught the peak in all its glory. He describes it as, “Normally fogged in... a shy mountain.” 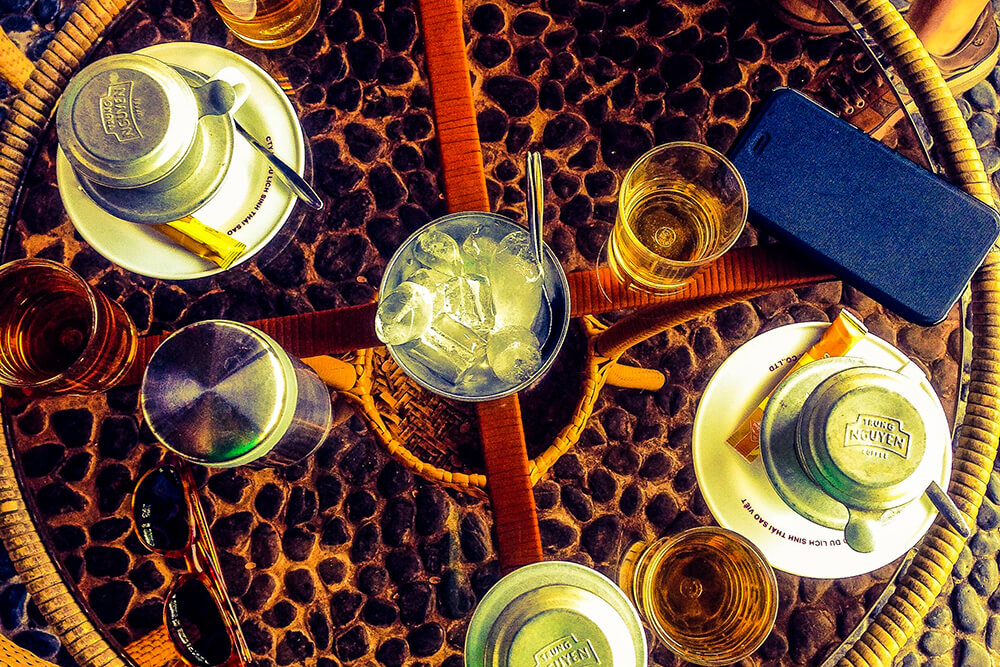 Food is an important part of any 15 years of memories! One of our favorite things about riding in Vietnam... the coffee!! The smooth liquid collects in its unique drip fashion. Then it pairs with condensed milk, smoother than an average blend with a hint of chocolate to its taste and aroma. Residents serve this rich dark drop on every corner of the country. The perfect way to kickstart a great day exploring the country by bike! 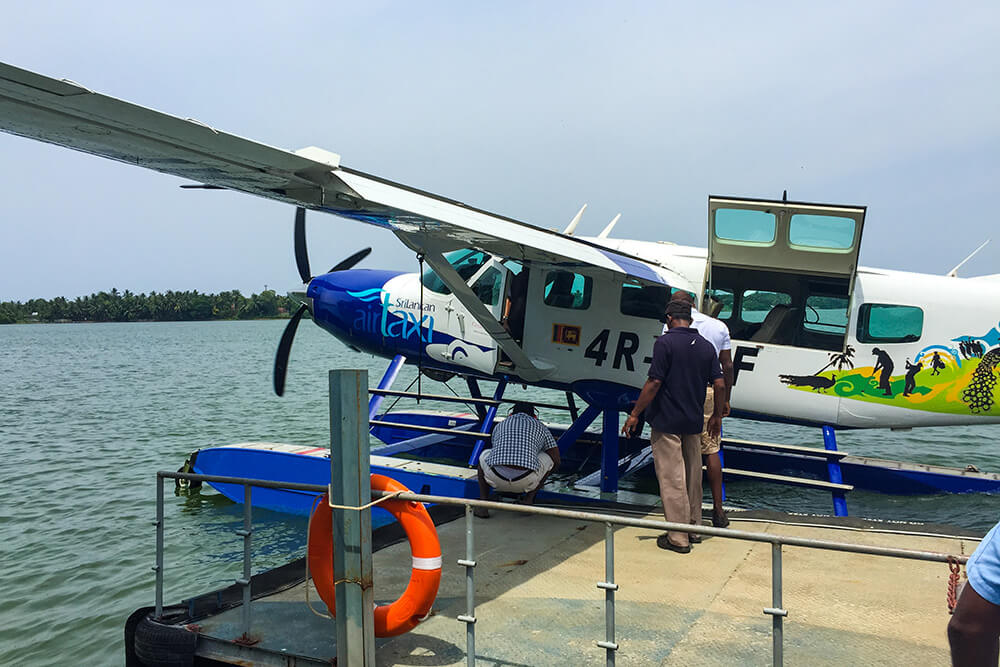 After traveling all the way over to the east coast of Sri Lanka in the space of a week or so, there had been some good riding, but also a lot of driving. The driver and his “pedal to the floor” or “Sunday grandpa” driving extremes put Adam in dread of entering his vehicle. The driver mentioned that he had been in the army; his foot shot and his scalp grazed by a bullet. Maybe he suffered from PTSD or maybe he just drove erratically. Either way, at the prospect of a 10-hour drive to return to Colombo, Adam was less than enthusiastic. Then an associate, Ruben, mentioned a seaplane that flies on a schedule from Batticaloa. This meant one could just buy a seat without chartering the whole plane. So it came that Adam flew on this neat little seaplane. At one point they came in fairly low over a national park where there where around a dozen elephants drank by a reservoir. The happy pilot even did a few circles so they got a good look. It was one of the most memorable aviation experiences! 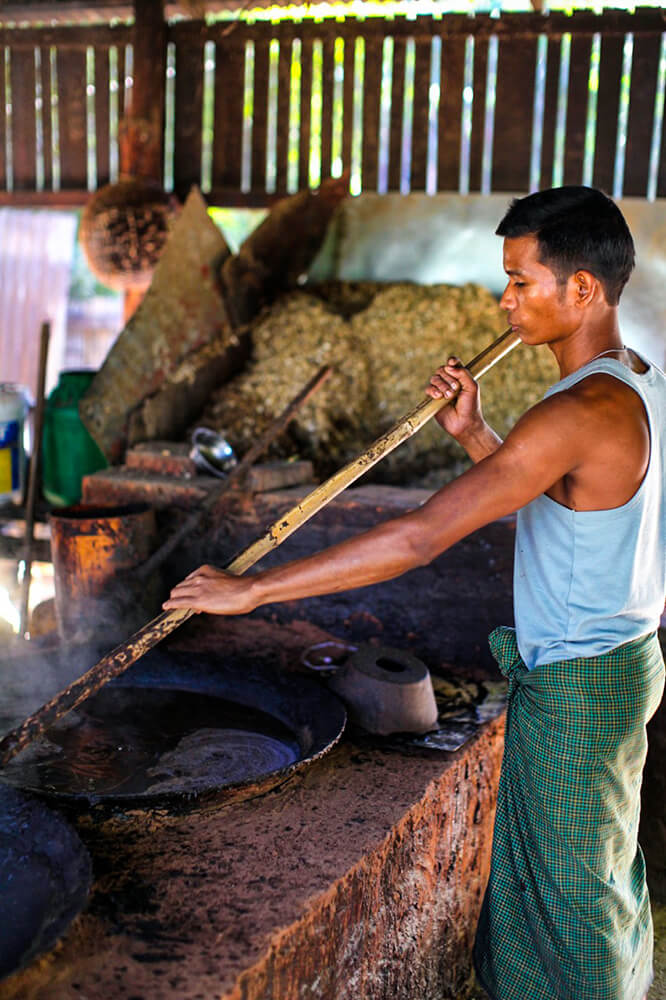 In a small shed, come factory, in Bagan (Myanmar) a ‘Pone Yay Gyi’ producer prepares his latest batch. This product is unique to the town. The location is one of only about three such places that produce it. This makes a thick salty paste, usually made from fermented soybeans. The dark paste becomes a condiment added to salads, rice, and other dishes for that extra jot of flavor. The method for making it goes back many centuries. Guests often report that this is an unexpectedly interesting highlight of our morning tours in Bagan. 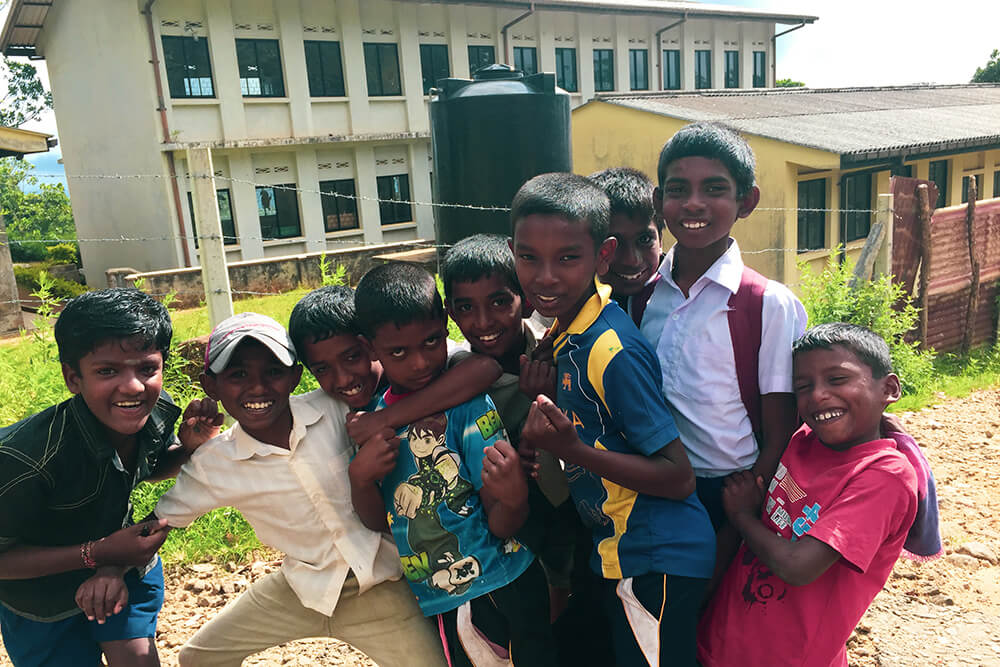 Another research ride, this time Sri Lanka. Our group spent a night up in a beautiful tea estate villa. We stumbled upon it the day before. Then the group enjoyed a ripping descent down into the valley that morning. Adam followed a GPS track that he thought came from his colleague Blair. However, this particular track was snuck into his files by some kind of saboteur. It was one of the most brutal climbs he’d ever done. Crazy steep and done in 36-degree temps, 4km out of 16km of the trail formed loose rubble. A cliff lined one side and a set of deep ruts formed the other. Adam was fried by the time he reached a school at the top of the climb. Greeted by anyone other than these smiling, friendly school kids, he might have been a rude, blathering mess. All he could really get out in croaked words was “water?” They kindly directed him to their favorite local shop. Finding the water sold out, we received a massive bottle of sprite. 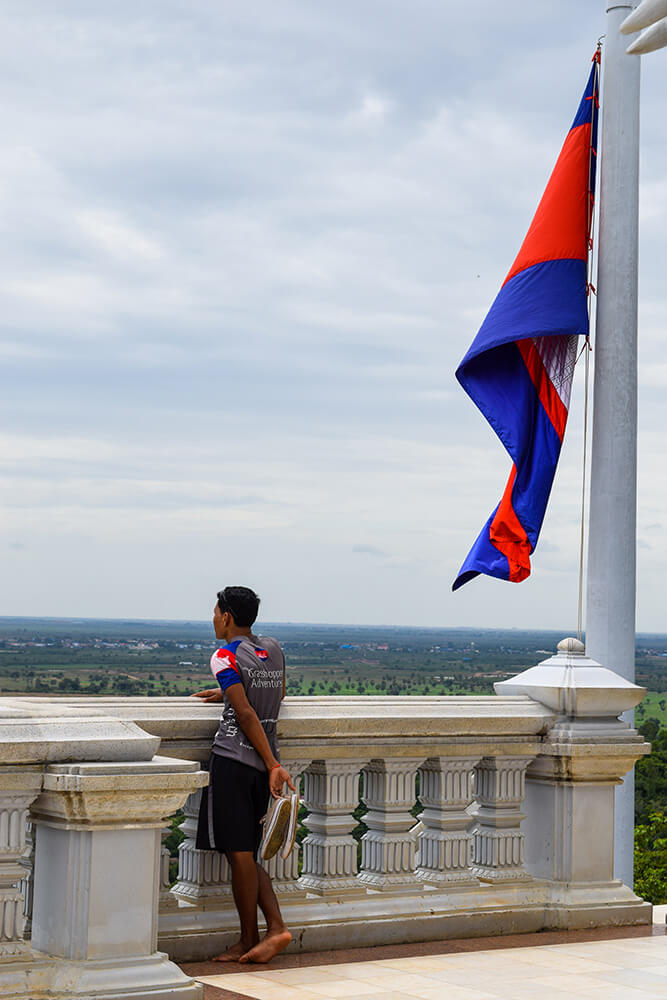 Lot was our Cambodian guide for many Mekong Bike and Boat trips. Not only did he know every detail about his country and surroundings and treat the guests with special care, but he also revealed a hidden talent. On particular evenings, during our briefing of the next day’s adventure, he would pass around copies of original hand-drawn maps! Completed only the night before, it included small details like fish in the rivers, tiny grass huts, fruit fields and a key at the bottom of what the colored routes and tiny symbols represented. We realized we had an artist in our midst. This stolen shot of Lot gazing out over the Oudong Temple to the countryside he knew so well, was too good to pass up. 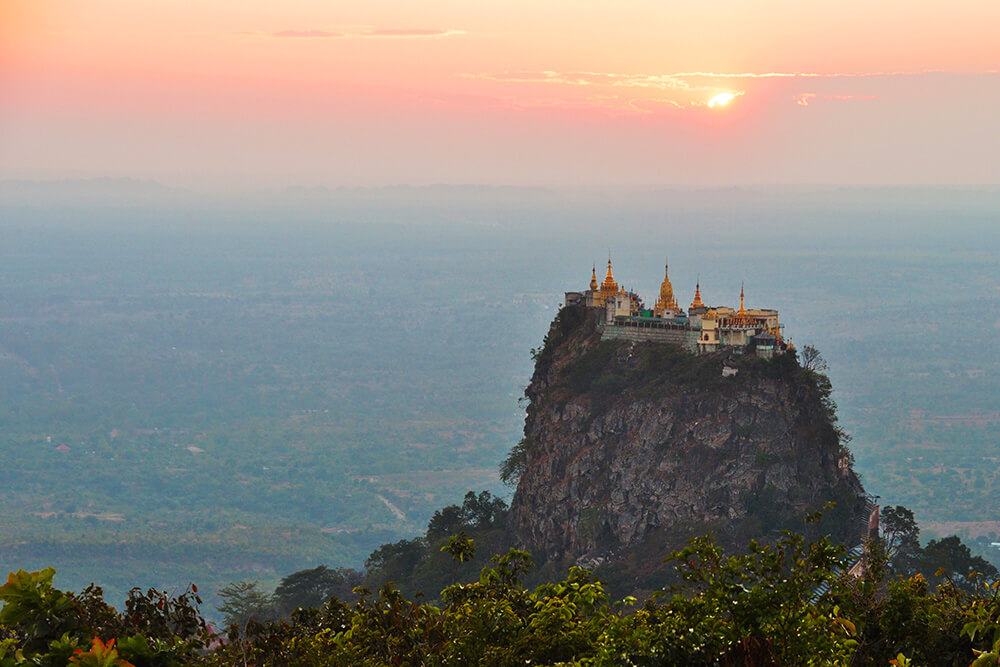 Situated poolside atop Mount Popa we relax and watch the sunset over the Myanmar landscape. The towering Taung Kalat (pedestal hill) sits in the foreground with its striking Buddhist monastery perched on the ancient volcanic rock which rises over 650m above sea level.

This is an important pilgrimage location for the local Burmese and popular overnight stop for those who join our Multi-day tours that pass through the region. After a sharp, but relatively short ascent at the end of a solid day’s cycling the hotel’s pool is extremely welcoming to a set of weary legs and the view is just as rewarding.

These are just a smidgen of the gallery of memories we’ve collected in this past amazing decade and a half. We look forward with anticipation for the adventures yet to be! Thank you to everyone who has joined Grasshopper Adventures and gathered your own treasured memories. See you on the road!